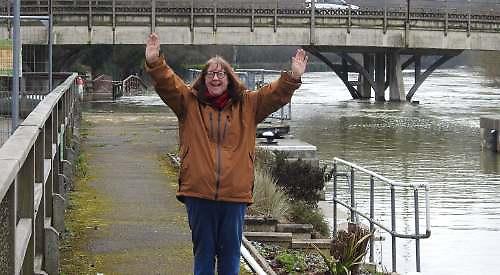 A WOMAN has walked the distance from Land’s End to John O’Groats for charity — and lost five stone in the process.

Karen Wiles, whose Dutch barge Edith is moored on the River Thames in and around Goring, embarked on her 847-mile virtual challenge on September 28 and completed it at the end of May, four months ahead of schedule.

She raised £1,420 for the Thames Valley Air Ambulance service.

Mrs Wiles, 59, a retired IT professional who lives with her husband Bret, walked between two and six miles each day through the South Oxfordshire countryside, mostly on different sections of the Thames towpath. She recorded her daily mileage using an app and took photographs of the scenery and wildlife along the way.

The charity gave her a fluorescent tabard advertising her challenge to the people she met en route to encourage them to donate.

Mrs Wiles is continuing to walk daily to maintain her health and plans to climb Mt Snowdon in September.

She said: “I’ve been walking daily for so long that finishing the challenge was a bit of an anti-climax in many ways.

“However, I’ve started a new virtual walk along the Welsh coast just for fun. I wore through a pair of old boots which I’d had for ages, which is a shame as they were as comfortable as a pair of old slippers and I’m going to have to break in another pair.

“I’ve had lots and lots of supporters, particularly from the Goring and Woodcote area, and I’m incredibly thankful to everyone who donated.”

Mrs Wiles, who has lived on the river since 2005, was morbidly obese at the start of the first coronavirus lockdown last March but joined a Slimming World group and lost weight.

This encouraged her to change her diet and to slowly build up to walking 10,000 steps, or about five miles, per day. She said: “I couldn’t manage a mile when I started but I’ve had a complete change of lifestyle. I’m still working my way towards losing another half a stone.

“It has all happened very naturally and I’d encourage anyone to try it — just get out there and do a few steps at a time because you’ll very quickly build up.

“I now feel bad tempered if I can’t get out even for a short walk so it has completely changed my life. I even managed a nine-mile walk recently, which nearly killed me but it was worth it.”