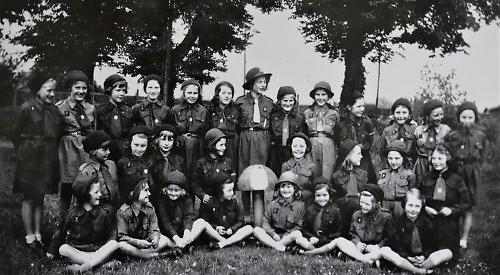 A FORMER member of Goring brownies has unearthed a long-lost photograph of the pack from the early Forties.

Avril Nash, 89, of Cleeve Down, found the picture while clearing out her house and would like to hear from anybody who recognises themselves or a family member.

She was a member from age seven to 12 while her older sister Jean Webb, who died some years ago, served as Brown Owl.

The photo was taken on Gardiner recreation ground, off Red Cross Road, where the group met weekly, in about 1941 and shows Mrs Nash with 28 others, of whom she can still name 10.

She is seen pulling a face in defiance of her sister, whom she says was popular but “bossy”, while her friend Gladys Strange is next to her giggling.

Mrs Nash, who has lived in Goring all her life, had stored the photograph in a box with other childhood keepsakes and hadn’t looked at it for decades until she rediscovered it in a wardrobe. She said it brought back memories of her childhood and life in the village during the Second World War.

She grew up in Gatehampton Road with her father Albert Webb, who worked at the village post office, mother Lilian, her sister and her late brother John. She attended Goring Primary School and then Wallingford School.

The latter had a dark uniform and she was once hit by an RAF serviceman on a bicycle as she was walking home during a blackout. Mrs Nash, who has five children and nine grandchildren. said: “Sadly, I imagine many people in that photograph have passed away. It was such a long time ago but I clearly remember the day it was taken.

“I was being very naughty because my sister was bossing everyone around, though you had to be bossy if you wanted to take charge of a group of naughty children. We enjoyed ourselves as much as we could but, looking back, we were pretty limited because of the restrictions.

“I remember we’d run through the pitch-black streets yodelling and quickly came to recognise each other’s yodel. It’s hard to imagine a life like that now as everything has changed so much.”

The other Brownies she can recall are Pam Averies, Margaret Edwards, Ann Penny, Sylvia Mist, June Conley, Velda Greenaway, Joy Conley, Pam Gilman and Audrey Vickery. Anyone with information can get in touch with Mrs Webb via the Henley Standard.