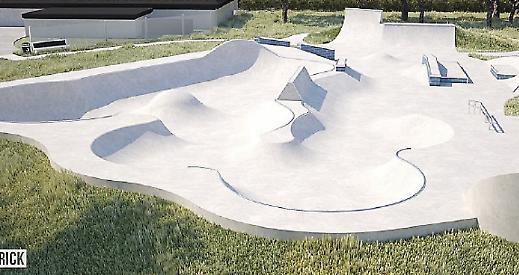 A CAMPAIGN to build a skate park in Goring has been revived after eight years.

Geraldine Poole, who lives in Gatehampton Road, wants the parish council to allocate a site for the facility when it updates the village’s neighbourhood plan.

The document was published in 2019 but may have to be revised to meet new housing targets.

Mrs Poole, 48, who is a part-time supervisor at Woodcote Primary School, says there isn’t enough for young people to do and a skate park would reduce the temptation for them to misbehave.

She says the problem isn’t widespread but some youngsters congregate in the village’s open spaces to take drugs or vandalise property.

She has launched an online petition, which has about 600 signatures, and gathered about 30 supporters who would help apply for grants and raise money.

The skate park could be suitable for scooters and BMX bikes and have seating for parents and carers to sit and chat while watching the children.

A landowner has offered a site off the Ridgeway footpath, near the Leatherne Bottel restaurant, but Mrs Poole says this is too isolated and could put youngsters at risk. She hopes another landowner will come forward with an offer.

She says the village’s public green spaces, which are owned and managed by the council, may also be unsuitable as this could prevent them being used for football and cricket matches.

If the council was to earmark a site in the revised neighbourhood plan, the scheme would require planning permission.

It is currently reviewing the use of all the village’s green spaces and will ask residents’ views as part of this process.

Mrs Poole said: “We desperately need something that appeals to all age groups in the community and it would bring so many health benefits.

“This idea is still at an early stage but already there’s a lot of excitement about it and I hope it will be more successful than previous attempts as it has been difficult to get anything going in the past.”

Mrs Poole moved to Goring with her husband Rob in 1995 and was widowed four years later.

She left her job as a senior sales manager for BT in 2004 to become an IT manager at Langtree School in Woodcote.

She would often chat to the pupils about the challenges of growing up in a rural area and always thought a skate park was a good solution because there were so many in London, where she used to live.

She supported the campaign by residents to have one built at one of the recreation grounds in 2013 but the parish council chose not to pursue the idea because opponents claimed it would lead to noise and antisocial behaviour.

There was another bid made in 2000 but this failed for similar reasons. Instead, a small jump obstacle was set up on land which is now part of the Wheel Orchard car park, off Station Road, but this fell into disrepair because it wasn’t well used. Mrs Poole began considering the idea seriously in 2017, when a new £290,000 skate park opened at Makins recreation ground in Henley, and went door to door seeking villagers’ views in late 2019.

She put the campaign on hold when the coronavirus pandemic began but hopes it will now take off as life returns to normal.

Mrs Poole said: “When you suggest the idea to older people, they say the kids already have football and tennis facilities but they’re out of touch with what teenagers are actually looking for.

“I’ve already had supportive comments from people of all ages, from seven to 84 years old, so there’s plenty of interest and only two or three objections.

“Historically, there is a lot of Nimbyism in this village — people say they’re happy to have a skate park but just don’t want it in their street. Their reasons for objecting are rarely valid and the reality is that they just don’t want change, which really gets my back up.

“I think this would be more acceptable on private land than a public space and I would still like to hear from anybody with a site to offer. I want to do this in a way that won’t attract a lot of objections. It needs to be a good size or people will lose interest but we don’t want to build in a location where it would interfere with other activities like recreational walking or sports matches.

“A lot of teenagers complain that there’s nothing to do in Goring or Woodcote because they’re full of old people and they’ve got a point.

“This area’s fine if you want to join the local archaeological society but there’s far less for the younger generation. They go to the skate park in Henley as often as they can but it’s a long train journey and I think some of them are too young to be travelling by themselves.

“It would be so much better to have something on their doorstep.”

Parish councillor Bryan Urbick, who is conducting the green spaces review, said: “I’m really pleased that Geraldine has started this conversation and our ears are definitely open to any suggestions.

“I’ve done a lot of research into other towns which built skate parks and all those fears of drugs, noise, antisocial behaviour and vandalism have never come to pass and I see no reason why they should happen here.

“Skateboarding and BMX are Olympic sports, which makes the idea more credible, but some people will doubtless be fearful and we’ll have to work through that.

“I’ve heard lots of comments that we should have more for younger people and some have even said they’re a bit embarrassed by how little we’re offering, so this is very much in our thinking, though I can’t say what the council will vote for.”

Woodcote Parish Council is considering a similar scheme following complaints about youths misbehaving, including an incident at Halloween last year in which fireworks were thrown at a villager.

It could build a “pump track”, an obstacle course for BMX bicycle and scooter riders to negotiate by “pumping” their machines up and down on their suspension. No location has been confirmed and talks are at a very early stage.