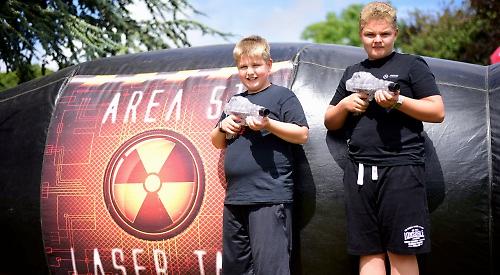 The Goring Mayhem event, which took place at Sheepcot recreation ground, was organised by the parish council as part of its month-long “summer of play” initiative.

There was a climbing wall, inflatable slide and obstacle course as well as an arena where the youngsters played laser tag.

Other attractions included a circus skills workshop, a giant chess set and a magician who performed tricks.

Councillor Bryan Urbick, who helped to organise the event, said: “It was absolutely fantastic. The children had an amazing time and their parents enjoyed sitting on picnic blankets while watching them. The laser tag was particularly popular and we even had a few of the parents joining in with the climbing. It was very busy at times but we limited numbers to keep it safe.”

The play scheme finished on the Saturday night with a silent disco at Gardiner recreation ground, where about 300 people danced to music in the open air while wearing headphones. Volunteers cleaned up the site the following morning.

Other highlights of the scheme included archery classes, evening camps with a fire, street dance lessons, games with a giant parachute, tie-dying, rounders, archery and morning yoga classes. The council spent £10,000 on the initiative, which was designed to help the community recover from the impact of the coronavirus pandemic.

It was also a chance to seek residents’ views on possible improvements to the village’s five green spaces, including the Sheepcot and Gardiner recreation grounds, the Rectory Garden in Manor Road, Bourdillon Field off Wallingford Road and the grassed area off Ferry Lane.

Cllr Urbick said: “The summer of play was very popular and we had great attendance even though the weather wasn’t perfect. We’ve also had some very useful comments and will be carrying out further research to build on those findings.”