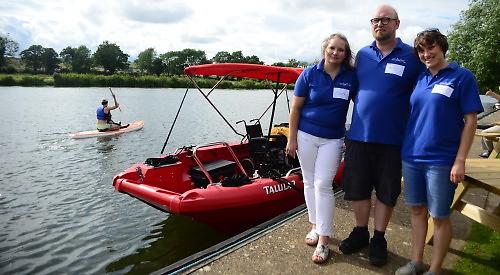 A CHARITY that offers trips on the River Thames for people with physical and mental disabilities is now up and running in Goring.

Dozens of people attended a launch party for Floatability, which can ferry up to eight passengers on a specially adapted accessible boat and will later stage fishing trips and nature talks as well.

The celebrations were held at Goring Thames Sailing Club north of the village, which is one of the charity’s drop-off and collection points.

Guests included directors Will and Laura Howard and Jo Price as well as supporters, volunteers and representatives from the Rivertime Boat Trust, which operates a similar service on a larger adapted vessel on the Henley reach.

They watched a video greeting recorded for the occasion by the GB Paralympic rowing team followed by a short clip of Downton Abbey actor Huge Bonneville discussing his love of the River Thames and its importance to people’s health.

They also enjoyed tea and cakes prepared by members of Wallingford Rowing Club and were shown the charity’s 17ft vessel Talula 2, whose bow opens to form a ramp for wheelchair users.

The charity has accepted several trial bookings and will use feedback from those sessions to refine the service before introducing two weekly scheduled journeys in the autumn.

Its volunteers are now fully trained in various skills from piloting the boat to safeguarding vulnerable river users.

Mrs Howard, a former clerk for Eye and Dunsden and Sonning Common parish councils, said: “We were really pleased with how the party went and it was lovely to see some of our donors as we’re incredibly grateful for their support in getting this off the ground.

“I was also glad that representatives from Rivertime attended. Although our offerings are slightly different, they are well established and there’s scope for us to help each other out in the future.

“Everything has gone well so far and it’s full steam ahead.”