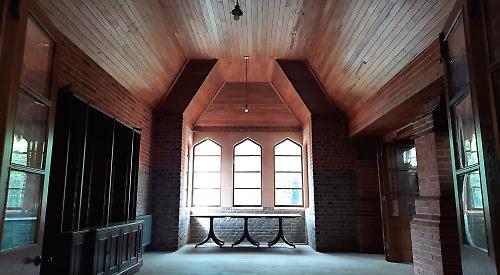 The Most Rev Bernard Longley, the Archbishop of Birmingham, carried out the ceremony at Our Lady & St John Catholic Church in Ferry Lane.

It took place during a confirmation mass attended by a large congregation.

They included friends and family of Father Antony Conlon, who was the parish priest from 2014 until his death in April last year, aged 72.

He had spent a lot of time working on the project, although the plans were first thought of in the late Seventies.

The extension, which is known as the Galilee, a medieval term for a church porch, is at the west end of the main building and took about 18 months to construct.

The main room has been named after Fr Conlon, who trained in Rome with the Archbishop, and can be divided into two. There is also a kitchen and disabled toilet. Fr Kenneth Macnab, who is now the parish priest, said: “It was an emotional day, especially for Fr Conlon’s family, but also a very happy one.”

The project was funded through donations from parishioners and grants from Catholic trusts and the Oxfordshire Historic Churches Trust.

The church was built in 1898 at half its current length and was first extended in 1938. Plans for the Galilee have existed since 1978.

Fr Macnab said: “I’ve got plans going back 40 years in a drawer somewhere, so it has been a long time coming. Obviously the plans had to be different for 2021 but there’s that history there.”

The Galilee was designed by London architect Anthony Delarue and built by Goring builders W A Hine & Son.

Fr Macnab said: “I was struck by the fact that almost all the craftsmen who have worked on the building are local men with a majority coming from Goring, South Stoke and Woodcote. It has lent a local feel to the project.”

Fr Macnab said: “At Christmas and Easter, or for a big wedding or funeral, the little church can be full to bursting.”

Over the winter there will be a series of events at the church to mark the opening and encourage parishioners to use the space.

Fr Macnab said: “We want to use the events to open up the new building to the public.

“We want them to know it’s there and for it to feel like an accessible space. It is very much an extension to the church rather than a hall but it will also be a space for community use. It will serve as a parish room to provide the usual range of parish activities and meetings.”

On Friday, November 26, members of the London Philharmonic Orchestra will play “Music for brass quintet”.

On January 28, there will be an organ recital by Graham Eccles, formerly of St Asaph and Bangor Cathedrals in Wales.

On February 25, Opus Anglicanum will present folk-inspired songs and words.

In the spring actor, writer and musician Jeremy Nicholas will be discussing the life of Jerome K Jerome, the author of Three Men in A Boat, whose ashes are buried at St Mary’s Church in Ewelme.

Mr Nicholas, who performed in a West End stage version of the book, was due to appear next month but is now longer available then so the event has been postponed to a date to be fixed.

Historically, a galilee had a role in processions and was used as a meeting point between the monastic community and townspeople. More recently, churches have used them as schools and seminaries.