Flint House therapist appears on Crimewatch with back care advice 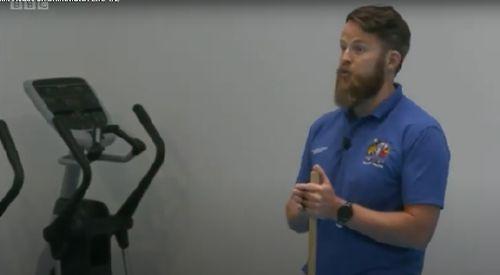 A REHABILITATION therapist at the police rehabilitation centre in Goring has appeared on TV’s Crimewatch programme — to offer advice on back care.

Mark Bindefeld has been making videos about back exercises on Flint House’s YouTube channel since the first lockdown in March last year.

Now he has appeared on the BBC show to help raise awareness.

Flint House is a charity which helps injured police officers back to full duty and employs both mental health practitioners and physiotherapists.

Many of its clients suffer from long-term back or shoulder pain, which can be caused by the heavy body armour which police officers sometimes have to wear for up to 12 hours at once.

Rather than just treating officers who have developed back problems, the centre now wants to be more proactive by making fit and healthy police officers aware of the exercises they can do to stop back pain developing.

It has launched a “back to basics” campaign with videos to teach officers the correct way to wear body armour, exercises to increase their core strength and how to develop good posture.

Mr Bindefeld hopes his appearance on national television will spread the message further, saying the exercises could help everyone, not just police officers.

In the programme, he spoke to presenter John Paul Davis, a former officer, about the campaign, and taught him a hip hinge exercise, using a broomstick to help strengthen the core and lower back.

“It’s quite a nice exercise to show visually,” said Mr Bindefeld. “Over the last two years we’ve had to select exercises that people can do easily at home, like the one with the broomstick. You can use any kind of pole. I’ve really got into video and camera work while doing the YouTube for the charity, so it was really exciting being involved in a professional production with big proper cameras, a director and sound guys.

“During the first lockdown we closed down completely and we did three classes a week, run by four of us working from home. Because I was the most comfortable on camera, I ended up hosting them. We started posting a lot of videos on YouTube so people could follow along at home and copy the exercises.

“My bosses and everyone at work are very happy with how I came across and we got to show off our new gym. There were people contacting my mum who she hadn’t heard from for ages who said they’d seen me on the telly.

“However, my 12-year-old son said ‘that was a bit rubbish’ because I only appeared for a few minutes.”