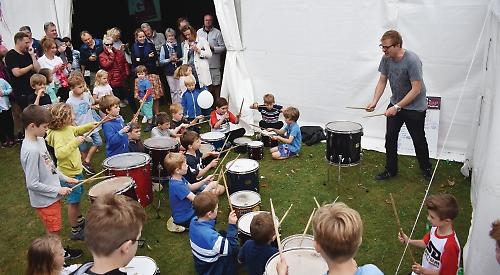 A DAY of celebration will be held in Goring to mark the Queen’s platinum jubilee next year.

The Goring GAP festival committee has been granted permission by the parish council to use Sheepcot recreation ground on Sunday, June 5.

Festival director Ginny Avery told councillors that this was appropriate as the festival was created as a legacy project after the village’s celebrations of the Queen’s diamond jubilee in 2012.

She said next year’s event would be free of charge or greatly subsidised.

There could be stalls run by village groups, a dog show and tug of war.

Ms Avery said: “There will be events for children, less able people, we want to cater for all demographics and be inclusive of everyone. We have an amazing village and we want to celebrate that.”

But Councillor David Brooker expressed concern about up to 4,000 people walking on the grass at Sheepcot.

Ms Avery replied that some damage was inevitable with any event but the organisers would try to minimise it.

The event will form one day of next year’s Goring GAP festival, which will take place from Thursday to Sunday, June 2 to June 12.

This includes the special four-day bank holiday weekend for the jubilee from Friday to Monday, June 3 to June 6. The rest of the festival will take place in a marquee to be erected on Gardiner recreation ground off Upper Red Cross Road and Rectory Gardens off High Street.

Ms Avery said: “The arts have an incredible way of bringing people together, which will be much needed after such a tough time with the pandemic.

“The festival will be a fantastic celebration of our amazing community and a chance for us to come together.

“We are bringing the marquee back, providing a central hub which will be buzzing with festival activities and events throughout the day and into the evenings, filled with both free and ticketed events, workshops, taster sessions and much more.

“Most people probably don’t know the GAP Festival is actually a charity. It was set up to promote and share the arts and culture within our community through the biennial festival.

“The whole festival is organised by a group of incredibly creative local volunteers who give their time to put on the varied programme of events and experiences for our community to enjoy.”

The committee is considering a variety of events including light opera, theatre and comedy. There will also be a children’s film festival with a range of categories, red-carpet style premiere screenings and prizes to be won.

More information will be announced soon.