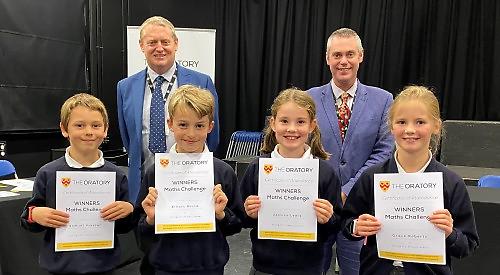 PUPILS from Goring Primary School have won a maths competition for the first time.

Samuel Procter, Elliott Rhind, Jessica Lewis and Grace Roberts were representing the school in the competition, which takes place at the Oratory School in Woodcote every year for children in year five. Seven other primary schools also took part in the contest.

All the children were set difficult maths challenges to solve in two hours with no adult help.

Goring primary business leader Tim Monk said: “It’s the first time we have won it, so we’re all extremely proud of the team. It was an outstanding team effort. Only four year five children get to be part of the team, so we chose the brightest maths brains. We’re grateful to the Oratory for running the event.”

The runners-up were Kidmore End primary with Crowmarsh Gifford in third. Other schools which took part were Checkendon, Ewelme, Peppard and Valley Road in Henley.

Beatrice Butler, of the Oratory, said there had been enormous interest from schools wanting to take part in the event so some had to be turned away as there was only room for 45 people.