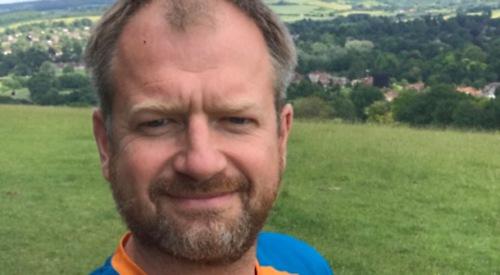 A LAWYER from Goring is to run 100 miles in support of young people’s mental health.

Jeremy Ellis, 44, is to take part in the Centurion Autumn 100, which departs from the village tomorrow (Saturday).

He is one of up to 330 ultra-runners in the trail race, which should take between 14 and 28 hours so they will be running in darkness with low temperatures for some of it.

Mr Ellis, who lives in Elvendon Road and is married with three children, is aiming to raise money for the Charlie Waller Trust, a charity set up in 1997 by the family of a man who took his own life at the age of 28.

Mr Ellis said: “It’s really tough for those young people who have had stressful exams and other challenging stuff going on in their lives over the last year.

“They won’t have been able to do all the sports, adventures and challenges that would release the pressure. I hope people see my challenge as encouragement to take on their own adventures.

“Running has become an increasingly important way for me to process things, to find balance and space and generally to feel okay.

“Over the last five years there have been many times when I’ve relied on it for my own wellbeing and I’d really like people who are struggling to see it as a potential way of feeling better.

“My mindset is to run as far as I can while conserving energy and not working too hard.

“There are going to be long, lonely sections, particularly in the middle of the night, and I am hoping that a special playlist will get me through them.

“No doubt there will be tough times out there but then there’s tough times in life and I guess I’ll just have to face up to them when they come along.”

The route for the run reflects the shape of a cross, taking runners on four
25-mile sections using the Ridgeway and Thames Path.

Runners will leave Goring at 9am. The first section will take them to Little Wittenham and back. Section two will take them out to Swyncombe Farm along the Ridgeway, section three goes on the Ridgeway to Chain Hill and the last stretch will be from Goring along the Thames Path to Reading. There will be 16 aid stations along the way.

All finishers will receive a Centurion 100 belt buckle, and those who finish in under 24 hours will receive a special “one day” buckle. The male and female winners will be awarded trophies.