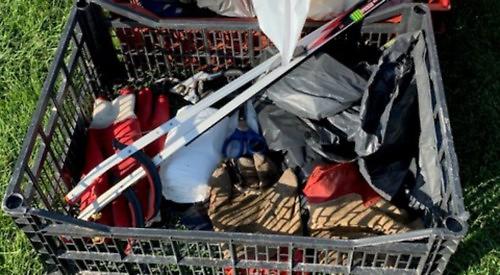 Six members went out in three boats to pick up rubbish which had accumulated in overhanging trees at the edge of the bank, meaning it could only be reached from the water.

They collected plastic cups, plant pots and an old curtain.

They were on the water for two hours and collected three bags of rubbish. Mr Digby said: “It was a lovely sunny day and we got a small but keen turnout to fish plastic out of the vegetation.

“A curtain was the most unusual find and we mainly found plastic bottles, containers and bags.

“We did it on World Rivers Day to help raise awareness of the fact that plastic gets into the sea through rivers.

“We’ll do it again in the spring when there’s less vegetation to get in the way.

“I walk a lot on the bank and you just can’t reach the plastic that’s in the vegetation from the bank.”