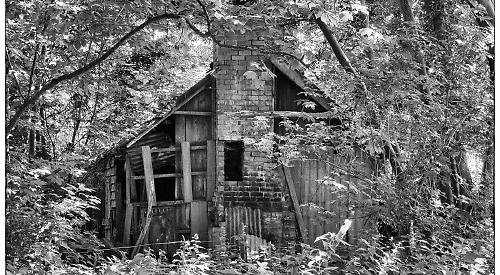 A PICTURE of an old blacksmith’s hut won a photography competition organised by Withymead Nature Reserve, near Goring.

Niall Teskey, from Wallingford, took the black and white photo, called “Shelter”, at the reserve, where the boarded-up remains of the timber and brick building now serves as a habitat for wildlife.

He was presented with the Withymead Trophy, a wooden platter turned from a tree felled at the reserve by Pete Morton, a warden.

Mr Teskey said: “What we may think of as a natural landscape has often been fashioned by long years of human activity, so one of the challenges of taking landscape photographs is to show the interaction of natural and human activity. I wanted to capture the change in the role of the old building from workshop to shelter for some of the wildlife in the reserve.

“I’d started that day taking photos of some of the wildlife but they didn’t turn out that well. I took about 50 or 60 and took some of the surroundings. Because that site is an old boatyard it’s quite interesting looking at some of the old buildings. Withymead’s a lovely place.”

The competition was run for the first time in conjunction with Wallingford Photographic Club, which Mr Teskey joined after moving from Brighton last year.

“I’m delighted to have won,” he said. “After joining a new club, I didn’t really know what the standard was going to be.”

Members of the club could submit photographs they had taken at the reserve in the past year. Second place was shared by David Hughes with a picture of a Loddon lily in flower and Barbara Hatley with an image of an insect. Paul Ross was third.

Jenny Hedge, who chairs the Anne Carpmael Charitable Trust, which owns the reserve, said: “Niall’s image of the old blacksmith’s building evokes all that we treasure about Withymead — a sense of history, heritage and industry enfolded by the site’s natural habitat.

“I’d like to congratulate Niall and thank all the club members who submitted work. Witnessing Withymead through your eyes was both a privilege and a joy for all who viewed and voted on the images.”

The 13-acre reserve is between Goring and South Stoke and was managed by naturalist Anne Carpmael for 60 years.