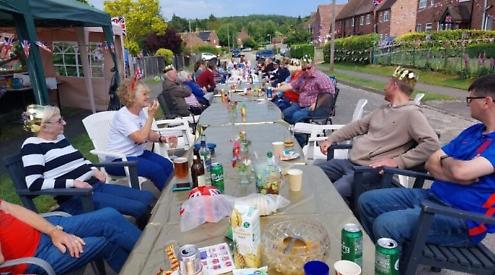 ABOUT 40 people attended a street party in Goring on Saturday.

Each resident of Cleeve Down contributed a platter of food, including finger sandwiches, sausage rolls and pork pies, as well as drinks including apple juice and Prosecco. They sat down to eat at 10 tables decorated with Union flags.

Angela Bell, co-organiser of the party, said: “We have a great community here and we seem to share a collective love of the Queen. This is just a little token of our gratitude.”

Jerry Merrell said: “Being a royalist, I feel we need to appreciate the Queen and all the hard work she has put in over the last 70 years. She has showed such devotion and this is our way of appreciating that.”

Anne Bending said: “I am not a massive royalist but I really respect the Queen and everything she does.

“It’s nice to have something to celebrate again as the last two years have been so rubbish.”