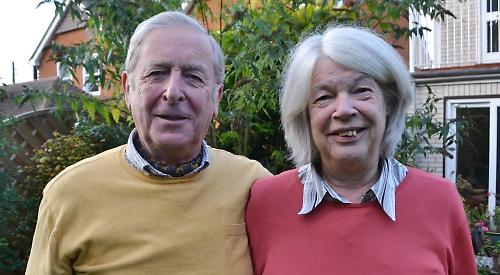 A COUPLE from Goring have celebrated their golden wedding anniversary.

Bryan Lee and his wife Helen, née Dowler, have lived in the village since 1973 and celebrated with a party at the village hall, which was attended by about 80 people.

Guests included friends from the community as well as friends and relatives who attended their wedding 50 years ago.

The couple were married on October 8, 1966 at Trinity Presbyterian Church in Oxton, Birkenhead, where they both grew up.

They then lived in Streatley, Pangbourne and Blewbury before buying their house in Milldown Road, where they have lived ever since.

The pair began courting in 1962 when Mr Lee, now 74, was working for agricultural feed supplier Bibby and his wife, now 70, was in her final year of school.

He led a church youth club and she was a member.

His work meant spending a lot of time in West Berkshire and after marrying the couple rented a cottage near Goring and Streatley Golf Club from Jane McKee, who attended the party.

Mrs Lee’s sister Diana Kerr followed the couple south and ran the Catherine Wheel pub in Station Road, Goring, with her husband Ray from 1992 until 2004.

Mr Lee said: “We were very young when we met — Helen was still in school and I was a big boy with my own car and a job. In those early days, there was no such thing as the M1 so driving to work and back via local roads was a real slog.

“That’s part of the reason we married so young. Back then, it was unthinkable to move in together without being married — I was living in accommodation with a couple of other lads.”

Once they had settled down, Mrs Lee took a job in a hospital pathology laboratory and later worked as a civil servant in Reading.

She stopped work when the couple had their children, Susan, now 41, and Diana, 39, who attended Goring Primary School and Langtree School in Woodcote.

Mr Lee left Bibby in 1977 and worked in engineering and electronics before being appointed head of oak products at furniture supplier Brights of Nettlebed in 2000. He retired in 2007 but still helps the company informally.

He also drives trains on the miniature railway at Beale Park, near Pangbourne, several days a week.

From 1978 until 1991 he was a civilian volunteer for the Royal Observer Corps, which operated from a secret underground bunker near Streatley, which was part of a nationwide network.

Volunteers were on standby to monitor radiation levels in the event of a nuclear attack.

Mrs Lee returned to work in 1983, when she took a job running the pharmacy at Woodcote Medical Practice. She retired in 2006.

She and her sister ran Goring brownies for much of the Eighties and Goring guides in the Nineties.

Now she volunteers at Goring library and she and her husband help to organise the commentary team at the Goring and Streatley Regatta. Mrs Lee said: “We’ve made lots of friends while our children grew up here and have never known another home so I don’t think we would ever consider moving.

“It’s a lovely community with lots of clubs, organisations and things to do and the whole area is absolutely beautiful.

“There are lots of voluntary activities going on, which I suppose is because there are more older people who can give their time.”

Mr Lee said: “This is a wonderful place. We really enjoy living here, although we do miss the sea as we grew up on the coast. We love the regatta as well. The community revived it in the Nineties and it has become hugely popular.

“We do lots of things together but it’s important to have our own interests. Most of our friends are mutual but Helen also dances at the village hall and plays bridge at the community centre.”

Staff from the John Barleycorn pub in Goring helped organise the couple’s party.

Mrs Lee said: “It was a lovely occasion with lots of friends from all different stages of our lives.”