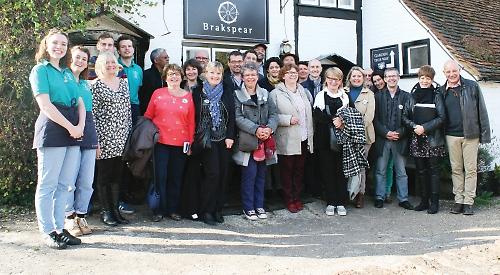 A DELEGATION of business owners from Goring’s twin town paid a visit to the village.

The trip began with supper at the Miller of Mansfield restaurant in High Street, where co-owner Mary Galer addressed the visitors in French.

The following day, they were given a tour of Goring and Streatley. Following lunch at the Catherine Wheel, they visited Masoom’s Tandoori, Swift Ink, Beacon Flooring, Inspiration, women’s fashion store Ruby Pepper, Virgo Beauty, Goring Hardware, Mary S Interiors, cycle shop Mountain Mania, the Goring Grocer, Goring Veterinary Centre and hairdresser Albert Fields. The owner of each business gave the visitors a short talk about the history of their business.

The French were also entertained at Pierrepont’s café and the Goring Chocolate Café.

On the final day they visited the anaerobic digester at Icknield Farm, near Woodcote, which was opened in 2014 by Goring businessman David Bermingham, and Brightwell Vineyard, near Wallingford.

The trip was organised by the Goring Gap Business Network and its sister organisation, the Bellême Boutique.

It was sponsored by the Goring and District Twinning Association, which provided translators, and estate agent Warmingham and Goring Gap News.

It is hoped the visit will result in Goring businesses stocking goods from their Continental counterparts and vice-versa. An exchange programme for work experience students could also be established.

Organisers Dawn and Richard Roberts, who jointly chair the business network, came up with the idea earlier this year after visiting Bellême with treasurer Phil Robson.

Mrs Roberts said: “We were incredibly impressed with its business community so an exchange visit seemed like a no-brainer.

“We learned a lot about how they do business. For example, retailers in Bellême take turns at organising an event each month or so to attract footfall. I’m really grateful that so many retailers from the Goring community agreed to take part. You do wonder whether people will take an interest but we had a very enthusiastic response.

“I’ve heard only good things from the feedback so far.

“The French all had big smiles on their faces at the end of the trip and didn’t want to leave. I think they were very impressed by the level of service they received and by how dynamic and close-knit our business community is.

“We don’t know exactly what will come out of this but it was a great start for strengthening our links and sharing information.”

Goring and Bellême have been twinned since 1979.