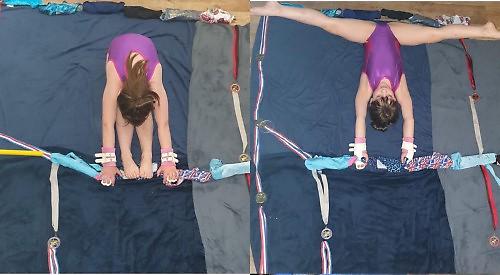 A GYMNASTICS club has organised an “Olympic Games” for its young members and their families.

Staff sent members a PowerPoint presentation with instructions on how to take part. Each participant can compete against their family members in a series of events at home.

Almost all the events can be done indoors and have rules to make them challenging and entertaining.

For example, the floor exercise involves placing several soft toys on the ground and sitting in front of them with straight legs so the participant touches them with their feet.

The person must lie down with a basket behind their head and then attempt to move the toys with their feet and drop them into the basket without getting up from the floor.

The exercise requires people to roll back in order to lift a toy above and over their heads to place it in the basket. This is carried out for a minute to see how many toys the individual can collect.

The winner is the person who collects the most in the set amount of time and receives a gold medal while the second and third place competitors win silver and bronze medals. The medals are available via a series of templates on the presentation and can be printed off.

There is also information about how to make an Olympic banner and a torch out of items such as paper, card, scissors and Sellotape.

Additional templates include the flags of the United Kingdom, Australia, Canada, Iceland, Greece, Japan, Israel, Germany and South Africa. These can be printed out so each contestant is able to represent a different nation. There is also a blank template for people to colour if their nation is not on the list.

The gym has encouraged the children to use their teddy bears as supporters and decorate them in flags so they look like fans.

Club director Rebecca Taylor said: “It has been good. A lot of them really enjoy these activities. I’ve had lots of feedback from parents thanking us and saying how much their children have enjoyed doing it with their families.”

The club is also running daily challenges via its Facebook and Instagram accounts so its members do not run out of exercises during the lockdown.

Mrs Taylor devised gymnastics-related board games and flash cards for the children whereby they are instructed to perform specific exercises or poses.

Each card has a picture with a different pose or exercise, which helps them practise what they have learnt during normal sessions at the club.

The children have also received images of gymnasts performing a particular exercise and must name it before replicating it themselves.

Mrs Taylor began planning how the club would support its members once it was clear it would have to close because of the lockdown. She said: “We wanted to do things so they can still feel a part of the club. If they take part in the challenges and send me their videos then I repost them.

“I think the kids like it. A lot of them send the photos to me and a lot also just enjoy doing it in their own at home.

“I’ve been doing the Facebook challenge each day and I try to target a different age group as the little ones are not going to manage all of them.”

Normally, the club provides tuition for children aged two to four and recreational sessions for those aged five to 16. It also provides an elite pathway for talented children who train for 20 hours a week. About 20 adults also take part in separate sessions.

Mrs Taylor said the older members had been sent flexibility charts and instructions to complete exercises such as the splits or bridge.

“It’s to keep them flexible and they should try to do that every day,” she said. “There are also strength and conditioning exercises such as push-ups and sit-ups.”

She supplements the training with activities that she finds online and shares with members.

These include a challenge set by the American gymnast and Olympic gold medallist Simone Biles, who was filmed removing her trousers while maintaining a handstand, and another from British gymnast Kelly Simm, who was photographed with her leotards and medals which she made look like a set of bars on the floor on which she performed a routine.

The challenges have increased the club’s online following and it now has about 1,000 and 2,700 followers on Instagram and Facebook respectively compared with about 700 and 2,000 previously.

Mrs Taylor said the children enjoyed seeing photos of themselves attempting challenges online. One involves placing a T-shirt on the floor and then putting it on while doing a handstand.

Mrs Taylor received pictures of members trying this and said: “I got four back from people who’d managed it and three of complete fails whose parents sent them in anyway but I didn’t post those online.”

Another challenge involves doing the splits in an unusual place.

Mrs Taylor said: “There was one little boy whose family moved into a new house just before lockdown. The rest is a building site and he did his splits in a load of rubble. Another girl got on top of her shed and did it.”

She said the pictures reminded her how much she misses the children and how the lockdown has affected the club.

Mrs Taylor said: “On my darkest days when I’m feeling down and receive a video of someone it makes me feel better. It’s really lovely and I really miss them.”

The gym has 49 members of staff, 30 of whom have been furloughed while the rest are young adults volunteering or training as coaches whose services are now unnecessary.

Only Mrs Taylor and her colleague Tricia Conneely, a coach and business manager, remain in work. They reply to emails, carry out the general administration and are planning for when the club can re-open.

“Obviously we’ve lost a third of our income this year,” said Mrs Taylor. “We’ve had to cancel all our birthday parties, holiday clubs and we’re now into a term which is not happening.

“We’re just holding out. I think we have enough money to keep managing but it’s going to be difficult. We would really like to welcome those children back soon because we’re part of a big family and they’re really important to us.”