Kennylands gymnasts get a taste of success at all levels 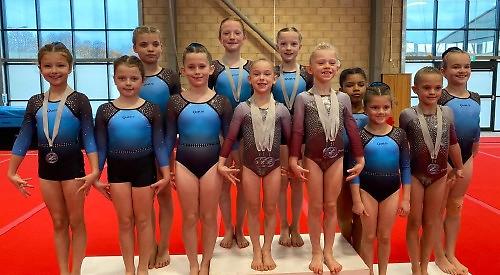 Renai Fullick retained her place in the South of England regional squad as well as securing the all around title. Fullick was also awarded the gymnast’s choice award.

Estelle Rodger achieved medals in all of her competitions, including a gold on the bars whilst Melissa Loyd completed clean routines throughout the whole year with no falls in competition, winning gold on beam in every event she entered.

Sadie Maguire Ellis and Naia Dixon Neville both won annual salvers for the cleanest bars and vault respectfully at the Oxfordshire County Championships.

Jessie-Mae Teeuwen made her debut in national standard competition and earned her first all around title as well as gold on every apparatus at the CGA Christmas championships.

Jessica Telling qualified in fourth place for the national finals in the classic challenge bronze competition and competed for the South region at Surrey Sports Park last month where she earned three all round titles. Telling was also awarded the gymnast of the year shield.

Isabelle Marshman made her Kennylands debut in competition and the highest vault score in the region amongst all ages in her category. Marshman was also awarded the most improved award.

Jones was awarded the gymnast’s choice award, Hughes the most improved award and Wojciechowska the gymnast of the year shield.

This is all coming off the back of lockdowns and online sessions running throughout the pandemic. These gymnasts and parents have all shown amazing commitment to the club and our coaches and we are really thankful and proud of this.