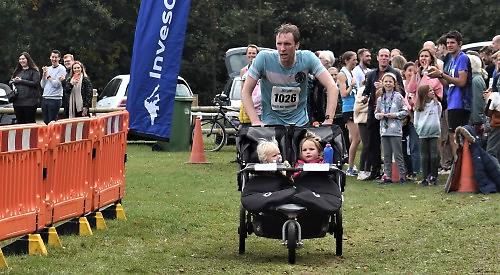 THE Henley half marathon will not be held again unless new organisers can be found.

It has been going for almost 40 years and used to be the second largest sporting event held in the town after Henley Royal Regatta.

It has helped raise hundreds of thousands of pounds for the Royal National Lifeboat Institution and other good causes.

However, Henley’s two Rotary clubs say they can’t organise it any more because of a combination of ageing volunteers and a sharp decline in the number of participants.

The accompanying 10km race will suffer the same fate unless another organisation comes forward to take over.

The main race, which has been held almost every autumn since 1983, has lost hundreds of entrants in recent years due to rival events and, more recently, the coronavirus pandemic, which caused its cancellation in 2020.

“It has attracted more than 2,000 runners in the past but recently there have been many other new events in competition with our half marathon and, together with the effect of the pandemic, numbers of entries have reduced significantly.

“Organising this event has been a major exercise for the Rotary clubs. As well as finding more than 100 people to marshal the course, manage the start and finish and run water stations, the organisers are working hard for months before the date attracting entrants.

“On the day of the race, the town centre has to be closed to traffic for up to 30 minutes, which not only causes disruption, but also incurs the significant cost of road closures by Oxfordshire County Council.”

The cost of staging the event is around £12,000 but because fewer runners have taken part in recent years, the amount of profit made has plummeted.

Last year’s event attracted just 262 people for the half marathon while another 125 runners took part in the 10km.

Mr Thomson said: “We have been able to donate thousands of pounds to local charities over the years thanks to a good turnout of runners and the support of Invesco as the major financial sponsor.

“Recently, because the number of runners has reduced, the amount available for charity, after all the expenses have been paid, has reduced significantly and represents a poor return on the effort involved.

“Last year it stretched our resources and we have reluctantly had to admit that we can’t continue. Covid-19 and competition from other events haven’t helped but someone else may be able to step in to turn things around.”

The races have been run on the second Sunday in October for many years, starting and finishing in Borlase Field, next to Henley Rugby Club, off Marlow Road. The two sets of runners are set off a few minutes apart.

The main race follows a route over Henley Bridge, along Remenham Lane to the Flower Pot pub at Aston, back along the towpath and over the bridge. Runners then go along Marlow Road, up Icehouse Lane to Fawley, down Fawley Hill and then back to the start via the Fair Mile.

The 10km course follows the second section of the same course from Marlow Road.

The half mararathon was founded by Tony Hobbs, the fourth member of his family to own Hobbs of Henley, to raise money for the Henley branch of the RNLI.

Mr Hobbs organised the event until 2003 when the Rotary Club of Henley Bridge took over and in 2019 Henley Rotary Club became partners in the event.

Mr Hobbs, who lives in Peppard, said he would be sad to see the marathon come to an end but wasn’t surprised.

He said: “I know about all the problems that come with organising it. There are other events now, such as the London Marathon, which was held the week before last year’s half marathon and had an impact on numbers.

“I would like to say a big thank-you to the Rotary Club of Henley Bridge, which took it over from me and has given us support and generous donations over the years. I know the RNLI has been most appreciative.

“I would love for someone else to come forward to run it and to continue the legacy.” Mr Thomson said the Rotary clubs would be willing to help a new organiser.

He said: “We would love to see another organisation step forward and take over. We are very willing to pass on information and provide support.”

The main sponsors have been Invesco and the Henley Standard and the event relies on the support of Joseph Borlase, Fawley Court, the RNLI, Henley Army Cadets, Henley Lions Club, the Eyot Centre, Henley Royal Regatta, Thames Valley Police and Henley Rugby Club.

Mr Thomson said the Rotary clubs could not have run the event without their support and expressed their sincere thanks to them all.

Anyone interested in taking over the event should call Rotarian Peter Wilkinson on 07756 473507 or email plwilk46@aol.com