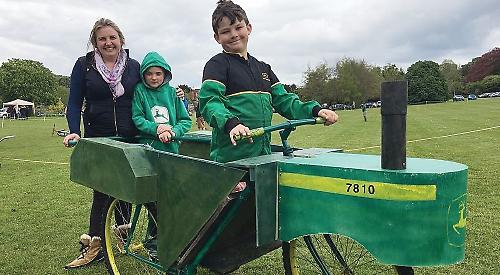 A PAIR of “super-heroes” won Hambleden’s May Day pram race.

The event was the centrepiece of a family fun day, which was held on the village’s recreation ground on bank holiday Monday and opened by the Rev Stephen Southgate, the rector of Hambleden.

More than 15 teams of two in fancy dress plus a “pram” had to complete two laps of The Dene. Along the way they had to negotiate obstacles including speed humps, a scramble net and an area where spectators could throw paint and water bombs at them.

The prams, which the participants had to build, included a fire engine, a tractor and a police car.

The winners were Captain America and Iron Man in a four-wheeled pram.

Adam Markwell, a member of the village’s sports and social committee who helped organise the event, said: “Hambleden has a tradition of having a pram race going back to the Seventies.

“When I was young, literally it happened every year. It used to be run on the road and when that became too hard to undertake it went across to the field.

“At the last one, which was about five years ago, someone ended up in hospital!”

The fun day also featured a barbecue, bar, bouncy castle and an inter-village pub tug-of-war contest featuring teams from the Bull and Butcher at Turville, the Prince Albert in Frieth, the Stag and Huntsman of Hambleden and a team from the sports and social club, who were victorious. This was followed by a children’s competition.

The day raised more than £1,000 for the sports and social club, which will go towards repairs of the playing surface and updating the pavilion.

“At its peak we had 400 to 500 people. Everybody seemed to enjoy the experience. The church did teas and coffees and all the proceeds went to them.”