Staff take on challenge for boss recovering from cancer 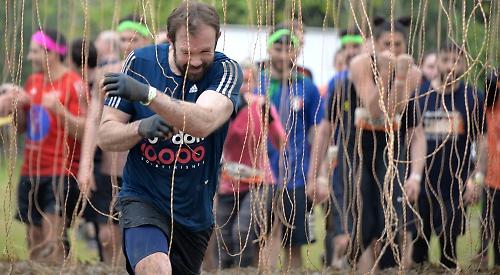 STAFF at a Henley tool hire firm raised more than £2,000 for charity by taking part in the fourth annual Tough Mudder challenge.

The seven-strong team from Southern Plant, which is based at Centenary Business Park, completed the 12-mile obstacle course at the Culden Faw estate in Hambleden in about three-and-a-quarter hours.

Their efforts were in aid of Macmillan Cancer Support as Simon Gale, who runs the company, recently got the all-clear after being diagnosed with bile duct cancer in December 2015.

They were among about 30,000 people who entered the event, which was held on Saturday and Sunday and the previous Saturday.

Entrants had to run along a trail through the hilly estate while tackling more than a dozen obstacles that tested their strength, agility, fitness and resistance to pain and cold.

They included Kong, in which runners swung from a series of hoops suspended over a 30ft drop, and Augustus Gloop, in which they had to climb up the inside of a vertical pipe while being pushed back by a heavy flow of water.

Other challenges included Arctic Enema, where entrants had to swim beneath a barrier through freezing cold water, and Pyramid Scheme, in which they had to help each other reach the top of a slippery, mud-strewn slope. Before crossing the finish line they faced a final challenge called Electroshock Therapy, in which they ran through a corridor lined with electrical wires that delivered a shock when they were touched.

Mr Gale’s eldest son took part in the second Tough Mudder at Culden Faw in 2015 and has also completed two Tough Mudder events in Cirencester but the rest of the team were taking part for the first time.

He said: “It was really good fun despite being very tough. Some of us didn’t do as much training as we probably should have done, but we all got through it together and had a lot of fun. The whole ethos of Tough Mudder is that it’s not a race so we stuck together and helped each other over every obstacle.

“Everyone talks about the obstacles but I think the hills were by far the hardest thing. I’d forgotten how hard the Henley course was — the one in Cirencester is much flatter and easier.

“I enjoyed the monkey bars and the swinging hoops on Kong and thought the ice bath was one of the hardest.

“It was so cold it was just insane and we couldn’t get out quick enough. It was fun but such a shock to the system.

“I think people enjoyed the more physical obstacles where you had to use your strength rather than the endurance ones. Pyramid Scheme was great because we had a big team so it was easier to get each other to the top.”

A group of about 20 supporters followed the team around and waited for them at the finish.

Murray Gale said: “They were cheering us the whole way round, which really kept our morale up and gave us the drive to continue.

“I think it was a different feeling for the others because they’d never done it before, but they were very happy while I was proud for them and proud to have led them round as a more experienced runner.

“I’ll definitely enter again because I love the camaraderie. I think you get hooked once you’ve done it once.

“I’m really pleased with the amount we raised and we’ve still got donations coming in from customers, so we’re definitely feel it was worth it.”

Mr Gale was told he had bile duct cancer after he went to the doctor feeling unwell. He underwent surgery to remove the growth in January last year but doctors found it had spread to his liver. He had chemotherapy but the disease had spread to his abdomen and was thought to be incurable.

Mr Gale started treatment to keep it at bay but unexpectedly received the all-clear in February.

He and his family have raised another £5,288.74 for Macmillan with events and challenges over the past six months. In October Mr and Mrs Gale raised £2,800 by selling utensils and equipment from the Heart IQ Kitchen, a food experiences company that they ran from their former home in Holmer Green in Buckinghamshire.