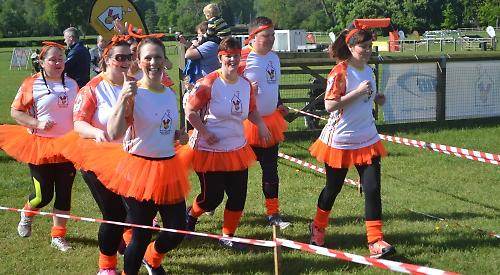 MORE than 300 people took on a 10km obstacle course for a children’s charity.

The Whole Hog Challenge took place at the Culden Faw Estate in Hambleden on Sunday.

Competitors had to follow a route which included steep hills and muddy tracks as well as obstacles covered in mud and water.

They were raising money for Ronald McDonald House, a charity run by fast-food chain McDonald’s which provides free accommodation for families with children in hospital.

The teams included the families of those treated by the charity as well as staff and supporters.

A team of 12 people was running for six-month-old Albie Mackenzie-Brooks, from Wooburn Green, who suffered a collapsed lung, bronchiolitis and pneumonia when just a few weeks old.

His family, including mother Lucy, stayed at the Ronald McDonald House in Oxford.

She said: “It really was the biggest godsend. It meant I didn't have to leave my poorly baby and I could have my two other children stay with me and I had somewhere to go when everything was getting on top of me.

“Albie fought and fought and came out the other side and is now at home with his brother and
sister.”

Peter Hopkins, a partner at Mercers Solicitors in New Street, Henley was among those taking part.

He signed up after a representative from the charity gave a speech at a meeting of the Henley Business Partnership, of which his firm is a member.

Mr Hopkins, 53, said: “I’m just amazed so few people from Henley know about this run on their doorstep. It would be great for local families to do as a team.

“The course was a visual treat, winding its way up the Hambleden Valley, England’s most beautiful dry chalk valley, with charming marshals at each obstacle, even one armed with a hose!”