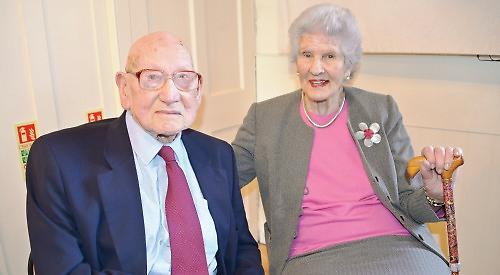 THE former village butcher of Hambleden has died, aged 100.

Arthur Wheeler, who marked his centenary on April 20, passed away at the Royal Berkshire Hospital in Reading on July 15 following a short illness.

Hundreds of people attended his funeral at St Mary the Virgin Church in Hambleden on Monday and the pews were filled.

Mr Wheeler’s coffin was draped in the Union flag in honour of his service to the village’s branch of the Royal British Legion, which he founded.

The congregation sang The King of Love My Shepherd Is, Guide Me O Thou Great Redeemer and Praise, My Soul, The King Of Heaven while the eulogy was delivered by Rev Stephen Southgate, the rector.

Mr Wheeler, who trained as a shopkeeper and slaughterman at William Lee’s butchers in Henley as a teenager, worked from a unit next to the Stag and Huntsman pub from 1955 until he retired in 1980.

The business was initially owned by Mr Lee and Mr Wheeler was manager before he bought it outright.

His regular customers included Lady Hambleden and she was one of about 100 people who attended his 100th birthday party at the village hall along with Lord Kimberley of Medmenham, Rev Southgate and cartoonist Gray Jolliffe, of Pheasants Hill, who designed a birthday card and published a special cartoon in that day’s Daily Mail as part of his Chloe & Co strip.

Mr Wheeler was presented with a cake made by villager Louise Foers featuring a Lego butcher figure carrying a steak and a meat cleaver.

The fifth of eight children, Mr Wheeler grew up in Crocker End, near Nettlebed, and left school aged 14 to work at the village bakery.

He met his wife Edith at Mr Lee’s Hambleden premises and they married in 1939. He was called up to serve in the Second World War in 1941, shortly after the couple’s daughter Joy was born.

He spent most of the war as a tractor driver hauling tanks across India on trailers to support the Burma campaign. On his return, he worked for some years as a handyman and gardener and the couple had their second child Robert in 1948.

Mr Wheeler’s shop became a private house after he retired but the sign has been left up as film crews often visit Hambleden to shoot traditional English country scenes. Mrs Wheeler died in 2010 followed by Joy in 2013.

Mr Wheeler was a keen gardener and an active worshipper at Hambleden church, where he was a sidesman for many years.

He was also a past president of district branch of the Royal British Legion and received the organisation’s gold badge for service.

His son Robert, who lives in Ealing, said: “He was very much loved in the community. People spoke very affectionately of him because of the sort of person he was.

“He was very amicable, never lost his temper and was calm and encouraging. I think he was respected for that as much as anything else.

“The butcher’s shop was a big part of his life — it wasn’t necessarily ‘fun’ as it was very hard work but it made him very much part of the community and he continued to play a very active role after retiring.

“He loved every minute of his 100th birthday and was very grateful to everyone who helped him celebrate, although after that I think he felt there was little else he could achieve.”

Rev Southgate, who used to attend the men’s lunches which Mr Wheeler would organise at the village hall, told mourners: “I shall always remember Arthur’s smiling gratitude as we brought him Holy Communion in the nave and I don’t suppose there are many of us who ever saw him without a tie.

“We all know that Arthur was kind and cheerful but I gather he had always been even-tempered. Not one for getting flustered, he would very often say ‘don’t worry, we’ll manage’ — and he was right.

“When we celebrated his 100th birthday, it felt like Arthur could probably go on for ever. Red wine and red meat were his recipe for a long and healthy life.

“I think patience, faith and kindness were the greater part of his very many years. So let’s take a few leaves out of Arthur’s venerable book and pledge ourselves to humility, hope and generosity as we say farewell to our most senior of friends and entrust him to God’s eternal care.”

Speaking to the Henley Standard at his birthday party, Mr Wheeler said: “ I’ve always been very happy in Hambleden as there’s a great sense of community.

“I have no idea how I’ve managed to live this long — it must be all the good meat I ate!”