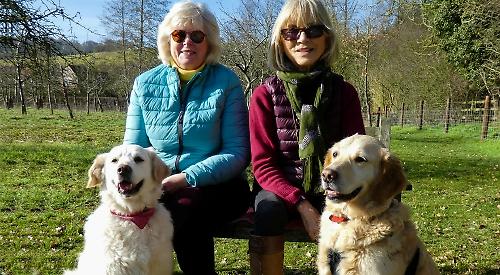 TWO women from Skirmett are organising a fund-raiser for the charity which provided their dogs, writes Phil Simms.

Susan Walker and Caroline Hyman are the happy owners of golden retrievers that were saved by Happy Paws Puppy Rescue.

The charity rescues dogs, mostly from Europe and Turkey, returns them to good health, acquires the vet certifications and prepares them for a new life.

Mrs Walker has given a home to Rory, who had been fostered by an English couple living in Turkey, while Mrs Hyman wanted an adult dog that would settle in well with her other dog, Dudley.

The friends have organised a reception in Hambleden later this month which will feature a talk by clinical veterinarian and author Bruce Fogle.

Mr Fogle, who is the father of television presenter Ben Fogle, from Fawley, will speak about his life and work.

Mrs Walker, who is married to Peter Allies, described the process of getting Rory as “overwhelmingly positive” and said she wanted to raise money for the charity so it can help more people. She said: “We have had a series of golden retrievers and we lost one unexpectedly to cancer a couple of years ago and it took us a while to get over that.”

After trying online to find a new dog, they came across Happy Paws.

Mrs Walker said: “It was by chance that I came across the website. It was very user friendly and the founder, Lisa Smart, had her mobile number on there so I called and we chatted. What struck me was that she was very, very committed and the process we went through was quick. One of the key things I said we wanted was a dog that had some experience of cats because we have three Abyssinian cats.

“After a week or two she thought she had found a dog for us — Rory was with a foster family in Turkey.”

The foster family would keep them up to date with Rory’s progress, including sending them videos on how he was doing.

Mrs Walker said: “We saw Rory playing with other dogs and also two of their cats, which was a big tick in the box. It all continued to happen quickly and we were given a date of June 21 for when he would be brought over.

“We do not know much about his history but he has scars on his legs and if he had been left out there he would have been killed. We know he is aged between five and six and hope he has many more years ahead of him.

“Rory has settled in well. When he came in with us he was met by one of our cats, Jasper, who was very close to our previous dog, and they touched noses as if to say ‘welcome home’.”

Mrs Hyman and her husband Ken had owned a golden retriever previously and are delighted with Sasha. Mrs Hyman said: “We are so glad that we have been able to save him and provide him with a loving and safe home.”