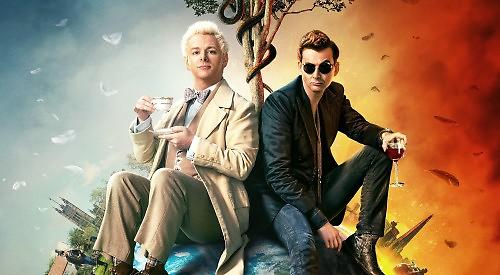 HAMBLEDEN is enjoying a starring role in a new BBC fantasy series.

It doubles as the fictional village of Tadfield in Good Omens, an adaptation of Terry Pratchett’s novel.

The six-part weekly drama, which began on BBC 2 last week, features former Doctor Who star David Tennant as Crowley, a demon, and Michael Sheen as an angel called Aziraphale who team up to prevent the coming of the Antichrist and the end of the world.

The Antichrist, a teenager called Adam Young, lives in Tadfield with his family and enjoys riding his bicycle along the lanes and playing with friends while walking his dog in the surrounding countryside.

The children are shown running along the main street, past St Mary’s Church and the Stag and Huntsman pub and along the lane that runs behind the recreation ground.

The former Wheelers Butchery, which is now a private home, is visible in one shot.

The teenagers were also filmed buying ice creams at the village shop, where staff sometimes had to duck behind the counter to avoid appearing in other shots.

Although the scenes are set at the height of summer, they were actually filmed in a cold and breezy week in September 2018 and the actors struggled to appear warm and happy when the cameras were rolling.

Colstrope Farm, about halfway between Hambleden and Skirmett, doubled as the home of Arjona’s character.

Jeanne Keene and her grown-up son Ben, who live at the property, stayed in the front room while the crew filmed mostly in the kitchen and a downstairs back room. Any scenes which took place “upstairs” were shot in a studio.

During one scene, Arjona and Whitehall were outside in what was meant to be heavy rain and wind and had to pretend they were being blown about because the weather was to be added later using special effects.

The farmhouse has appeared in many films and TV shows, including the 2017 adaptation of Ian McEwan’s On Chesil Beach, in which it doubled as the childhood home of the main character Edward Mayhew. Mr Keene said: “We get a lot of requests to film here because it’s such a versatile location — we’ve got the big old barns outside and you can easily make it look like something from the past or a fantasy world.

“The crews really do take over but they’re very respectful and easy to work with. They plan everything down to the last detail and remove any items that don’t belong in the shot as well as bringing in a few pieces of their own. Some of our belongings stayed in the picture.

“They rarely use the entirety of the house and leave somewhere you can hole yourself away. We’ve already watched the show on DVD but it’s still very exciting when it goes out on terrestrial television.”

Mrs Keene said: “It’s interesting to watch the finished programme when you’ve actually been there during filming.

“It’s amazing how it can take all day for them to set up a scene and film it many times over, yet it’s only a very short part of what’s shown.”

The front gardens of several cottages off Pheasants Hill were used for scenes in which the young characters were chatting together.

In one scene they sat on a bench belonging to villager Mavis Cripps, whose property previously featured in the 2001 mini-series Band of Brothers and Disney’s 1996 live-action remake of 101 Dalmatians.

Mrs Cripps said: “There have been so many film shoots around this village that nobody minds being involved — it’s only for a couple of days and it’s something to talk about.

“Even though it has happened a lot over the years, it’s still exciting to see how they put it all together and to recognise your house when it appears.

“My daughter-in-law was watching and sent a message saying, ‘Oh Mum, there’s your house’.”