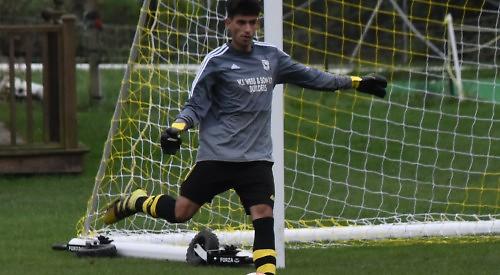 A TEENAGE footballer was injured in a car crash in Henley which destroyed two vehicles.

Manuel Pinto, 18, a goalkeeper for Hambleden FC, was in the back of a taxi travelling along Wargrave Road from Henley when it was involved in a head-on collision with a van coming out of Kentons Lane at about 10.40am on Monday.

He suffered whiplash and was taken to Royal Berkshire Hospital.

Mr Pinto, of Upton Close, Henley, was on his way the Piggott School in Wargave, where he is a student, when the crash happened.

He said: “I was in the back of the taxi looking down at my phone. The first I knew about the crash was the taxi driver shouting and then it just happened.”

Mr Pinto, who works as a waiter at Hotel du Vin and referees youth teams at Henley Football Club, said: “I’ve got whiplash and a chest pain from the seatbelt and my whole body aches.

“I’m sitting in bed in a lot of pain. I can’t really move or walk and I can’t play football.

“I was in hospital for two to three hours. The doctor asked if I could move my neck and he said the pain would get worse but I wanted to go home.

“I’ve been told not to do anything for 10 days and then I’ll have a scan from my GP.

“I’m upset because I’m missing a lot, including at least 10 days of work, and I pay rent to my parents to help them out.

“I won’t be able to take part in football at the weekend.”

Paul Trimmings, manager of Hambleden FC, said: “The main thing is that Manuel is okay. Football has to come second in this case.

“He’s losing out on playing and on his income, which is very sad for him.

“I have spent a few hours trying to get someone to play on Saturday.”