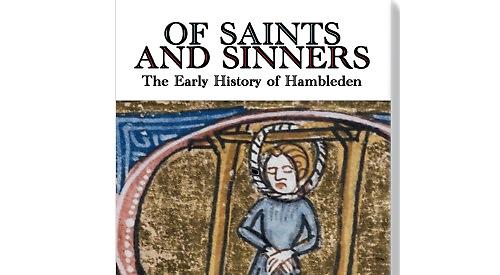 A FORMER accountant is seeking to uncover the unwritten history of the village he loves.

Chris Whitehead, 75, has released his third book exploring the history of Hambleden, where he has lived since 2000.

His latest book, Of Saints and Sinners: The Early History of Hambleden, is available from the village shop.

Part 1 gives an imagined version of the life of a villager in 1320 and part 2 tells the story of Hambleden from the year dot until 1320.

Mr Whitehead, who used to be a finance officer at Henley Town Council, said: “In part 1 I’ve tried to recreate some of the characters whom you might have met if you had stepped out of your Tardis in the village square in that year.

“In part 2, I’ve tried to unpick the story of Hambleden up to 1320. To do so, I needed to go back in time to a pre-Roman era and trace the village’s evolution, which has not always been smooth.”

Mr Whitehead chose the year 1320 because it marked the canonisation of Thomas de Cantelupe, a Lord Chancellor of England and Bishop of Hereford, who was born in Hambleden in 1320.

His first book was To Be a
Pilgrim, which told the life of Admiral Sir Alfred Ryder, whose family lived in Hambleden Cottage in the 19th century.

Mr Whitehead said his latest book took about six months to write and involved a lot of research.

“I had to write it during lockdown so couldn’t go up to Buckinghamshire library and look at original stuff,” he said. “But I read about 50 books and if you dig deep you can finds all sorts of interesting things on the internet.

“It’s like doing a jigsaw and you haven’t got all the pieces or the picture you’re trying to make but you can imagine.

“I finished the first draft two months ago and then it went through three or four more iterations. It’s a hobby and I do it because I love the village.

“As time has passed, the village has been protected by the National Trust and the Chilterns Area of Outstanding Natural Beauty.

“It has not changed since the Second World War v and the layout hasn’t changed for even longer.

“The Romans had a settlement down at Mill End but over 100 or 200 years the entire settlement moved up to Hambleden. Why did they move? The book puts forward some answers on that.

“And from when the Romans left in 400 to about 1750 we have no graves. Where are all those people? They must be under the ground somewhere but no one knows where.

“It’s an unusual place; the buildings are not neatly laid out, they’re like someone has dropped a pack of cards. There are no yellow lines or street lamps.

“Like most villages, the history of this one has not been written. I’ve written the first part of it to 1320 and the more modern part of it with the Great War.

“It will be up to someone else to fill in the rest. I don’t know if that person will be me but I expect it will be.”