Hundreds swelter in the heat at fete 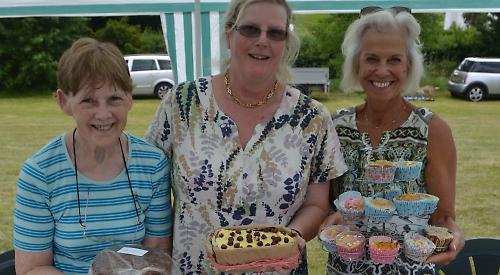 HUNDREDS of people attended Harpsden fete on the hottest day of the year so far.

Sales of ice cream and cold drinks soared as visitors to Sunday’s event tried to keep cool in temperatures that hit 30C.

Harpsden Pre-School ran a face-painting stall and children could handle reptiles, including a python, and a tarantula at another stall.

An arena in the centre of the village recreation ground hosted a range of entertainment.

There was also a barbecue, with meat provided by Shiplake Village Butchers, a bar and cream teas.

There were about 20 entries in the dog show and organisers provided bowls of water for the animals to drink and a paddling pool for them to cool off in.

Ben Harris, of Abrahams Road, Henley, performed an agility display with an 11-year-old Belgian shepherd after competing at Crufts earlier this year. Villager Jane Burtt, who helped organised the fete and ran the hoopla stall, said: “We were very worried about the heat and the turnout considering the conditions but the atmosphere of the fete was lovely.

“The stallholders who were lucky enough to have a gazebo were fine. We had an enormous surge of people at the bar where they could sit under a gazebo and enjoy their pints of beer.”

She estimated that about 450 people attended, helping to raise more than £5,000, which will be shared between St Margaret’s Church in the village, the Royal British Legion, Harpsden Pre-School and Harpsden brownies.

Mrs Burtt said: “The fete is the spirit of the village and very heart-warming. Because we’re so spread out, we haven’t really got a heart to our village, so with this sort of thing everybody is pulling together and it’s nice meeting people you have not met before.

“People come to us because it’s pretty similar every year and it’s very traditional.

Mrs Burtt thanked her fellow organisers and Jon Moulds, who ran the team which set up the fete.