Wright puts on Sunday best with half century 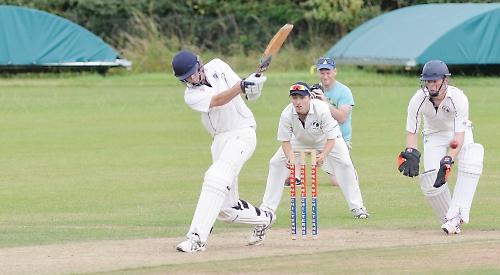 A HALF-CENTURY from captain Johnny Wright helped HARPSDEN to a comfortable victory over KENSINGTON on Sunday.

The Harpsden innings initially struggled to get going as openers Justin Bradley and Ed Birkett sat in against tight opening bowling from Barua and Tahir, with Barua’s first five overs all being maidens.

Kensington’s first change pairing of seamer Johnson and off-spinner Sen continued to provide control and took wickets where the openers had not.

Harpsden skipper Wright marshalled the later part of the innings for the hosts, batting steadily at first before finding a partner in Stanley as the pair put on 60 for the seventh wicket.

The Harpsden innings came to an abrupt close in the final over as the returning Tahir took a hat-trick of clean bowleds to leave the hosts 178 all out, three balls short of their allotted 40 overs.

In reply the Kensington innings never really got going as the Harpsden bowlers had the upper hand. The wickets were shared around with Matt Stanley, Rod Birkett, Shazhad Gulfraz and Stef Franklin each taking two wickets as the visitors were all out for 78.

There were a number of good catches in the Kensington innings including two for Gulfraz and a caught behind from Jon Stanley off the bowling of Franklin.