Franklin's knock not enough as villagers are held to draw 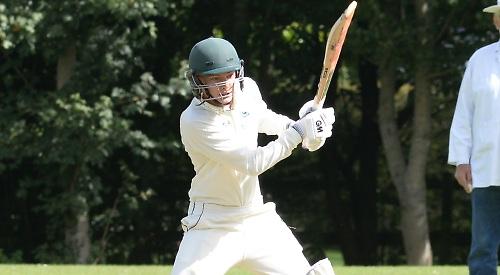 HARPSDEN finished their first ever season in Division 1 in third place after drawing thier final match of the season at home to PENN AND TYLERS GREEN 2nds on Saturday.

Having won the toss visiting captain Matt Lance decided to bowl on a green-looking track. With clouds starting to encircle, the decision initially looked like it had paid strong dividends with Harpsden opener Michael Cowdell falling cheaply by chipping the captain to point.

Lance continued with his nagging tight lines and helped Penn restrict the hosts to 40-5 by taking four quick wickets. It was down to Stef Franklin to rescue what was a precarious situation for Harpsden as he hit a brisk 64. His innings was curtailed by a shoulder injury he sustained when diving to make his ground at a tight run out opportunity.

After a short delay for Franklin to be helped off the pitch, Ollie Heath and Will Ward put on a fine sixth wicket partnership, taking the score to close to 200. Heath was the first of the two to fall, after being well caught off the bowling of John Cockroft for a resolute 40. Ward pressed on and only fell in the final over to the bowling of Simon Larter for a flamboyant 46. This left Harpsden in a strong position at the interval, finishing on 223-7.

However, as the players departed for tea, the rain started to fall and an hour’s play was lost. This left Penn in a challenging position, needing 224 off a reduced 28 overs. Rod Birkett led the bowling unit from the front with two quick wickets that gave Harpsden an outside chance of an unlikely victory. However, Penn opener Raunak Biswas batted with great guile and patience to stem the onslaught.

Ollie Heath then showed another facet of his game by removing Penn captain Matt Lance for 23. Biswas was joined by the aggressive John Cockroft who took advantage of some poor fielding to strike a rapid half century. He was eventually removed by Guy Leslie, caught at point.

The game lulled into a stalemate, as both sides realised that victory was a distant possibility. Biswas finished the innings 34 not out as Penn finished on 133-4 off their 28 overs. HURLEY’S Division 2 clash at WRAYSBURY 2nds was eventually abandoned.

The hosts were bowled out for 212, with Phil Ridgeway and V Sharma both taking 3-36, before rain stopped play. Hurley ended their season in seventh place.

HARPSDEN 2nds had a winning finish to their first season against THE LEE in Division 3, finishing mid-table. With Harpsden bowling first Shazad Gulfraz impressed with 4-51 while Sasha Burgess took two wickets to restrict the hosts to 203 on a good batting track.

Although Harpsden lost Justin Bradley to his first ball, a good and aggressive 77 from Ben Hancock saw Harpsden home with more than 10 overs to spare.