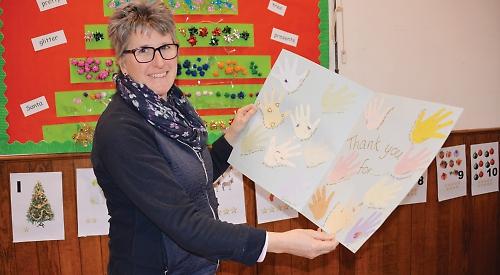 THE supervisor of Harpsden Pre-School has left after 11 years.

Susie Gerhartz, of Rotherfield Road, Henley, had her last day at the nursery at Harpsden village hall on Tuesday last week.

She was presented with a card which the children helped to make. It included a good luck message and the handshapes of each pupil with an individual goodbye.

Mrs Gerhartz started at the pre-school in 2006 as maternity cover, doing just four hours a week and then stayed on. She became supervisor in 2010.

Mrs Gerhartz said: “We were absolutely thrilled when we found out. We have to pack everything away at the end of each day because the hall is used by so many people, so it’s hard to get an ‘outstanding’ rating.”

She grew up in Henley and her father Tony Salmon, 91, was a GP at the Hart Surgery.

She trained as a teacher but ended up working in the classical music industry in London for more than a decade. During this time, she met her husband Ulrich, director of concert and artist services at pianomakers Steinway & Sons.

Her 16-year-old daughter Lucy used to go to the pre-school when she was little and now attends The Abbey School in Reading.

Mrs Gerhartz said: “I’ve been going to the pre-school for 13 years since Lucy started.

“I took a job when one of the staff needed maternity cover. Lucy had started school and it fitted around term times. The member of staff decided not to come back so I stayed on and kept going.

“I will miss the children, my colleagues and all the families. I have met so many people over the years.”

Mrs Gerhartz decided to step down so she can support her daughter during her GCSE years and spend more time with her family, particularly her father. She added: “My husband travels a huge amount so when he is home it’s nice to not have to worry about work.

“My dad is 91 and still doing brilliantly but I want to be around a bit more for him.”

The role of supervisor will now be split between two people — Libby Johnson will be teaching manager and Vanessa Smith will be business manager.

Mrs Gerhartz said: “We have always had fantastic staff at Harpsden and they will do a brilliant job. They’re very experienced and the children will have a lot of fun.

“The parent committee has been brilliant and was a pleasure to work with. The parents act as our employers and are a bunch of mums who take on the responsibility.

“A lot of them have made lifelong friends through the pre-school and that’s what makes it really special —  it’s a family and a community.”