Teenager made cadet to Lord-Lieutenant 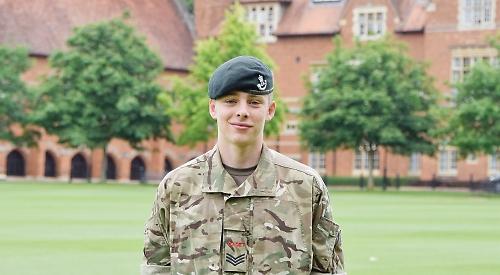 A TEENAGER from Harpsden Woods will become a cadet to the Lord-Lieutenant of Oxfordshire next month.

Max Martin, 17, will serve Tim Stevenson, the Queen’s representative in the county.

He is a member of Abingdon School’s Combined Cadet Force and was nominated for the role by his contingent commander.

Max faced a tough selection process which comprised an interview, inspection and a presentation on the future of the armed forces to a panel of senior officers.

He said: “It’s an honour to be appointed a Lord-Lieutenant’s cadet for Oxfordshire.

“I hope to be able to apply everything I’ve learnt from CCF and to be a good ambassador for the contingent and the force as a whole.”

Max’s role is to assist the Lord-Lieutenant as required, typically on parade for royal visits and to act as an ambassador for young people in Oxfordshire.

He is one of four cadets chosen from different units from within the forces.

Max hopes to make a career in the military and eventually join the Coldstream Guards.