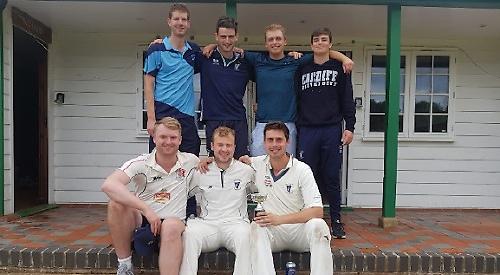 HARPSDEN reclaimed their village trophy in the annual sixes competition on Sunday.

The bar was set by an exhilarating tie in the first game of the day between Harpsden and Peppard.

Strong cricket was played by all five teams but Harpsden cruised into the final.

Their stand-out performer was opening batsman Johnny Wright, who was only out once across all the games, via a run out, and averaging more than 100 runs.

Peppard made their way to the final after defeating newcomers Holmer Green in the semis.

They were steered into the final by a superb innings from Rich Ashton to set up a replay of the opening game.

Harpsden’s openers paved the way to an imposing total of 71 off their five overs, with the impressive Wright not out again, with fine support from Christian Whittaker.

In reply, Peppard looked well set to make for an exciting finale, however the impressive James Moore, took two crucial wickets in his over, leaving Peppard chasing what would eventually be a total far out of reach.

After last year’s defeat in the final, Harpsden reclaimed the trophy finishing the day unbeaten with a strong all-round performance.