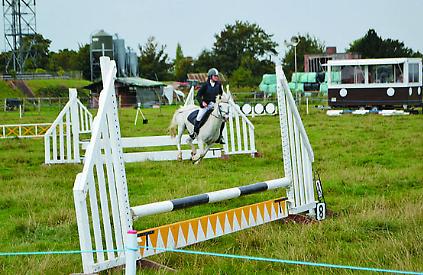 AN international dressage rider wants to build a riding school in the grounds of her home.

Anna Wilson, of Upper Bolney Road, Harpsden, says that she needs the covered training facility in order to further her career.

The open-sided building would be 21m wide and 64m long, the minimum size required by Olympic and international equestrian bodies, with a mirrored wall at one end for checking form and a two-storey viewing platform at the other.

It would be 6.25m high with a clock tower on the roof and clad in oak.

It would have stores, a kitchen, a toilet and a small amount of extra parking.

It would be built on a field that runs behind four neighbouring houses and would go on a plot between a stable, a horse walker and a storage shed which was built in 2010.

Mrs Wilson, who lives with her husband Richard, currently takes her horses to hired indoor facilities.

In her application to South Oxfordshire District Council, the planning authority, her agent Simon Cowcher, of Inasanctum Design, says Mrs Wilson must be able to train all year round in weatherproof conditions in order to remain competitive.

He says the building would not be used for commercial purposes and Mrs Wilson would accept a planning condition to that effect.

Mr Cowcher says: “Approval of this scheme would allow the furtherance of my client’s dazzling dressage career. Through dedicated hard work, she has the opportunity to be competitive at the highest level.

“Training year round in weatherproof facilities is a routine requirement. The international competition calendar runs all year, requiring preparation in all seasons.

“Last year the country experienced one of the hottest summers on record. These, and wetter winters, are expected to become commonplace.

“There is a welfare aspect for horses and staff... training horses in freezing or wet and windy conditions increases the risk of injury. In very hot weather, the intense level of effort puts the horse at risk of overheating.

“My client is a determined achiever but is, sadly, held back by the absence of this vital facility. She is hampered as a result of not having weatherproof training, making fair competition extremely difficult.”

Mr Cowcher says the site is well screened by trees and hedges so would not impact on the surroundings and it would benefit the five grooms who work there.

She made her international debut the following year for Poland, of which she is also a citizen, and rode again for the country last year. She also represented Britain at the European championships in 2017 and 2018.

Two neighbours have written letters of support, as has a groom who lives on site. The parish council is yet to comment.

The council will decide the application next month.