The ‘crazy’ woman caring for woods 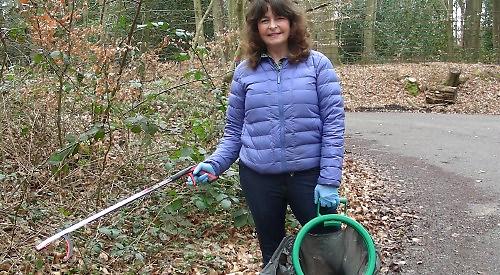 AN actress recovering from breast cancer has gone litter-picking almost every day during the coronavirus pandemic.

Cathy Burke says that she sometimes finds so much rubbish that she is out for hours and can hardly move the bags for the weight.

She decided to help the environment after going for daily walks with her family around their home in Upper Bolney Road, Harpsden, and being shocked at the amount of waste they came across.

Mrs Burke, her husband Peter Scholes and their two children would come across scores of food wrappers, dog poo bags and broken glass.

She decided to buy her own grabber and a hoop to keep rubbish bags open while she was out collecting.

“Really, I’m doing it for my children,” said Mrs Burke. “You want to think you have left the planet in a good state and haven’t completely trashed it. We are only custodians. I just feel it is everyone’s responsibility to help even in a little way or just by being a responsible citizen in the first place. If everyone plays a small part, collectively it will make a big difference.

“We are very fortunate to live in such a beautiful place and it’s just so saddening when you see other countries manage litter much better than us.”

She varies her litter-picking routes around the village and also spends time in Henley and Shiplake tackling problem areas, such as Reading Road.

However, it was the state of Harpsden Woods that she was particularly troubled by and she now monitors it closely.

Mrs Burke said: “We were doing a circular walk as our daily exercise and I started to notice there was a lot of rubbish and it really disturbed me.

“There was an awful lot of poo bags just in Harpsden Woods. This is such a beautiful place and for people to leave litter behind is just terrible.

“My eyes honed in on the rubbish rather than at the beautiful things around me.”

On one recent visit to the woods, she collected 40 poo bags in only an hour.

Other hot spots include Woodlands Road, which is often littered with drinks cans and bottles, while she has found tyres and even a road sign at the Tesco car park in Henley.

Mrs Burke said she never thought about how long she would be outdoors for but she could get “carried away” and once was litter-picking for five hours.

“Whenever I am out, people are always really sweet,” she said. “Lots of people say thank you, which is really nice and I try to encourage them to join in. It gives you a purpose — you get a bit of exercise and you’re doing something good for society.

“I literally go into the hedge — I must look like a crazy woman.”

Fellow villagers often come to the rescue when they see her with too much to carry.

Mrs Burke explained: “I do sometimes struggle with the weight of the bags. If I need to offload them, I knock on doors and tell them I’m doing litter-picking. Everyone who I’ve contacted so far has taken them, including the very large gated properties.”

She has learned about a group called the Harpsden Litter Pickers and regularly exchanges messages on WhatsApp with members about the rubbish they have found.

Mrs Burke was diagnosed with breast cancer three years ago around the time the family was moving to the area from West London.

She is yet to be given the all-clear but feels that going out every day is helping her recovery. She said: “I had a year of gruelling surgery and treatment, so for me getting out and doing exercise is imperative.

“It just gives me more of a focus and I’m also doing something for the community.

“I’m still on medication and I have one more surgery to go.”

Her husband, who works for Invesco as the head of tax for Europe, the Middle East and Africa, said: “I’ve been astonished by the amount of litter that she has picked up.

“We’ve been on walks together and the bags of dog poo are certainly the most unpleasant to find.

“It is also sad how quickly the rubbish resurfaces after she has been on a circuit of clearing it up. A week later, there is just as much as there was before, which is very depressing.”

The couple have been married since 2007 and have two sons, Barnaby, nine, who attends Westminster Abbey Choir School in London, and Edward, seven, who is at the Oratory Prep School in Goring Heath.

Before having her children, Mrs Burke spent 12 years as a singer and actress.

She appeared in pantomimes, portrayed Grace Farrell in a production of Annie and performed with Mid Wales Opera.

She hopes to revive her career after finding an agent during the pandemic.

During lockdown last year, the family grew vegetables and sold saplings to neighbours, raising £100 for the Friends of Kipkelion, a charity that supports people in Kenya by funding clean water, sanitation and healthcare projects.

Mr Scholes was a founding trustee when the charity was established in 2010.

Mrs Burke intends to continue her litter collections and is looking forward to the day when a large organised event is possible again.