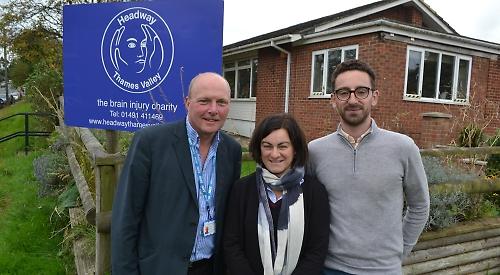 A CASH-STRAPPED charity in Henley is set to receive a £5,000-a-year grant from the town council — providing it can source an equal amount from elsewhere.

Headway Thames Valley, which has been supporting people with brain injuries for 30 years, has had to reduce staff and cut back its service from four days to two due to cuts in government funding.

The council’s finance strategy and management committee had turned down a request for a £9,500 grant but this week the full council agreed to the smaller amount subject to the match-funding.

Councillor Ken Arlett said: “Unfortunately, they are going backwards because they have lost so many grants.

“We are prepared to offer half of what they wished for. That’s £5,000, providing Headway can match that with other grants, and we can do that for three years.”

Councillor Stefan Gawrysiak suggested finding other users for the charity’s base at Brunner Hall in Greys Road as Headway was only using it twice a week.

He said: “We have a duty to explore other options with Headway and other organisations. This wonderful facility — and it is absolutely brilliant and really well-cared for — but not running it for five days is wrong.” Councillor Will Hamilton said the charity wanted to go back up to operating four days a week and the council’s grant would help it do that.

“They are also sharing some space with the MS group already,” he added.

Speaking after the meeting, Headway’s fund-raising manager Zoe Lane said: “We’re delighted that the council is going to be supporting us with a grant and we will definitely seek the match-funding and are confident we’ll get that.

“It helps with everything from boosting self-esteem and confidence to helping with speech, memory and wellbeing and it reduces isolation.”

The committee also agreed to give Henley Music School an annual grant of £3,000 for the next three years, subject to it achieving charitable status in 2018.

Laura Reineke, of Berkshire Road, Henley, founded the school in 2010 to provide music education to children regardless of their age, ability, background or means.

The school loans instruments for free, provides group coaching and curriculum support to schools and gives bursaries. It costs about £50,000 to run.

Mrs Reineke asked for £10,000 for the next three years but the committee had asked for more information before making a decision.

Cllr Hamilton said: “We thought it was a good thing that children are playing an instrument.”

Councillor Ian Reissmann added: “They have presented a full set of accounts and given answers to the questions the accountant has raised.”

The River & Rowing Museum will receive £13,800 a year from the council for the next three years.

The figure comprises a £7,500 grant and a £6,300 payment to reimburse the cost of renting its car park from the council.

The council rejected a request from Sue Ryder for £92,000 for new patient beds and other equipment at its hospice at Nettlebed.

Hospice director Stewart Marks told the council that the charity had followed councillors’ advice in trying to raise funds in other ways but still needed support.

l⚫ A 5km run or walk will be held on Sunday to raise money for Headway. The event will take place at Beale Park, near Pangbourne, from 10.30am. There will be refreshments and supporters are welcome. Free parking will be available.