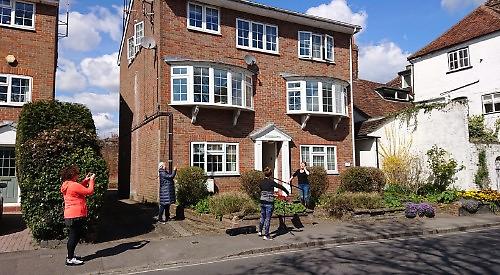 TWO musicians performed for a woman who had to spend her 100th birthday alone due to the coronavirus pandemic.

Moray Wood, from Henley, could not spend any time with her family because of the lockdown designed to slow the spread of the disease.

But her neighbour Susie Bidlake-Corser appealed for help and Laura Reineke and Rebecca Bell answered the call by going to perform outside Mrs Wood’s home in King’s Road while she kept the windows open.

Neither of them knew Mrs Wood before the day but they have a mutual friend, Joan Fennelly, who is a fellow member at Henley Open Water Swimming Club.

Mrs Bidlake-Corser, 68, a retired secretary who lives with her husband Martin, said: “I live three doors down from Moray and as we are all in lockdown I thought it would be such a shame if she sat there on her own.

“I asked if they would come and play and I was delighted when they said they would.

“Moray is on her own as her husband passed away a number of years ago. She is always very independent.

“I have always tried to be a good neighbour and help her if she is ever struggling with something. I have also been shopping for a lot of the other people on this road.

“Moray called me and said ‘thank you for making my day special’. I just wanted to make it a special day for her.

“It is an important day and I wanted her to enjoy it.

“I think Rebecca sang beautifully and Moray was tickled pink. She couldn’t come to the window but I put my head through and she said she enjoyed it.

“She also had so many phone calls — she is a very popular lady and she told me a smile goes a long way.”

Mrs Wood received dozens of birthday cards from friends and family as well as one from the Queen.

Mrs Bell, who teaches at St Andrew’s Preparatory School in Pangbourne, said: “I thought it was a really lovely thing to do for somebody who in other circumstances would have had more of a fuss made of them.

“It was a nice thing to be involved in — I can’t go out and save lives but I can give people pleasure through singing.

“I chose the song because I think the lyrics are very appropriate. It talks about being away from your loved ones and wanting to walk about freely.

“I think she enjoyed it. It was very windy and Laura had her sheet music on a stand and she had to use pegs to stop it from blowing away.”

Mrs Reineke, who runs Henley Music School, said: “We were there for only 10 minutes and she listened from her sitting room
window.

“The neighbours all came out when they heard what was going on and Moray loved it.

“It is just nice to raise her spirits. It is just our way of cheering her up.”

Mrs Wood was born in Thirsk in North Yorkshire. She was 19 when the Second World War broke out and she started a career in nursing. After the war, she worked for an optical firm and as a dental nurse.

It was while she and her husband Roland were on holiday and stayed at the old Little White Hart Hotel in Riverside that they fell in love with Henley.

When Mr Wood’s father Kenneth died in 1979, her mother Grace said they should all relocate to Henley, so she and her husband and mother moved to King’s Road.

Her mother had her own room and sitting room with a bay window and lived until she was just over 100. Her husband died in 1986.

Mrs Wood’s niece Michelle, who lives in Darlington, was due to visit with her two daughters for her 100th birthday but the visit was cancelled due to the virus.