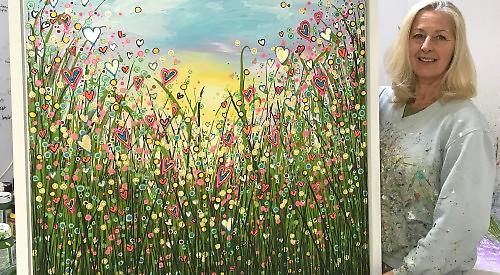 AN artist has created a commemorative painting to honour the work of NHS staff during the coronavirus crisis.

Sarah Pye, of Damer Gardens, Henley, created the surrealist vista in acrylic at her studio in Sonning Common and will be selling both the framed 1m x 1m original and a limited number of prints to raise funds for the health service.

The painting, called Hearts of Gold, depicts the sun rising over a field, as viewed from ground level, with the light shining through the grass and a profusion of wild flowers in which the heads are replaced by multi-coloured hearts outlined in gold leaf. The painting will be reproduced across the centre pages of next week’s Henley Standard for readers to stick in their windows in support of doctors, nurses and other health workers.

It will be accompanied by a poem which Mrs Pye was inspired to write while finishing it.

The original is on display at the Waitrose store in Bell Street, Henley, together with details of how you can order a print or make a donation.

Sarah, 55, is known for her paintings of nature scenes, often featuring wildflowers, which she exhibits at galleries across the area and regularly appear in the Henley Standard.

She came up with her latest idea after being approached by the Henley Standard to paint a canvas thanking the NHS, which she completed in about a week.

It will be sold for her usual asking price of £1,500, although she hopes a buyer may offer a higher amount as it is for a good cause.

The proceeds will go to the NHS Charities Together Covid-19 Urgent Appeal.

Sarah said: “I wanted to help because so many people are doing remarkable things to help the community and, like a lot of people, I was feeling a little bit useless and unsure how I could contribute.

“I’ve even got my brother doing shopping for me and he points out it’s one less person in the supermarket but I really felt I was doing nothing.

“I felt like painting something surreal and a little bit fun so I chose the hearts and rainbow patterns to signify how many people feel about the NHS at the moment.

“There’s so much support nationally and the noise you hear when people clap at 8pm on Thursdays is incredible.

“The other week I was being a bit too exuberant banging a wooden spoon on a saucepan and I ended up snapping it.

“There’s a real sense of solidarity with the NHS and a more general feeling of camaraderie as we’re all going through this together.

“I didn’t want my design to remind people of the outbreak itself because, as with all my work, I wanted people to smile and to think.

“I also didn’t want any money as it was a pleasure to paint and I know how hard people are working, sometimes without protective equipment.

“I’m lucky because I’ve got a garden and get to paint all day, every day and in isolation so my life hasn’t changed much but for some people it has changed dramatically.

“However, not everyone is financially challenged by this situation and I would hope somebody is willing to buy it for a good cause.

“The prints will be available in smaller sizes and will be produced following all the rules on social distancing.

“Sometimes I don’t feel like it’s a very significant gesture but I didn’t know what else to do. I want to give something back and I just hope it will attract someone’s interest.”

Sarah said she felt proud when she had finished the work, which she completed without first making her usual draft.

She said: “Once I get an idea in my head that I’m passionate about I just set to work on it. I don’t think I’ve even got a pencil in my studio.

“It’s hard to convey in newsprint but the original is incredibly vibrant and happy. It has a lot of depth as some parts are raised where I’ve built them up in little layers.

“It took a while but I would work on other projects while I was waiting for each layer to dry, so it’s hard to say how many hours it took but it was finished about a week after I started.

“I just knew it had to be happy and I think I’ve achieved that. It has captured the warmth of the sun, the bold, strong shapes of the flowers and the different shades of green in the grass.

“I was very pleased even before I added the gold leaf, but that touch really catches the light and brings it to life even more.”

The idea for the poem struck her near the end of the process as she used to write verses to accompany her paintings, although she stopped doing this some time ago.

She said: “I’ve always loved writing poems for myself and one day, when my partner was bringing me tea in bed, I asked him to run and grab my book. It’s nothing special but for me it fits the spirit of the piece.

“The subject was always on my mind because while I was painting I was constantly thinking about my reasons for doing it.”

Sarah says it is important to remain optimistic despite the current restrictions on movement and gathering in public.

She said: “It’s going to be harder for some people than others because many people have lost loved ones but my work has always revolved around making people happy.

“The biggest compliment anyone can pay me is to say that my work made them smile because that’s what I aim for, even when I’m painting something more naturalistic and not overtly ‘funky’ or humourous. That’s when I know I’ve done my job.”

Sarah, who has two grown-up children, moved to Shiplake with her parents Brian and Judy Deppe, who still live in the village, when she was nine. She started her career as a hairdresser, then retrained as a gardener when she was about 30 and worked at homes in and around Henley.

She turned her hand to art when she was 40, starting as an amateur by taking watercolour classes with artist Claire Prentice, who was then based in the town. She turned professional five years later, when it became clear that she had a talent for it.

Sarah said: “Claire was a massive inspiration who never tried to contain me or put me in a box. Sometimes she’d bring a model in for life drawing but I just wanted to paint flowers and she was always fine with that — she encouraged me to do whatever I felt I needed to do.”

She has exhibited at every Henley Arts Trail since it was founded in 2006 and also used to help run the event. She exhibits nationally throughout the year and has permanent displays at several galleries, including the Marylebone Gallery in London. She paints most of her pieces by laying the canvas flat rather than propping it up on an easel, then allowing tiny droplets of paint to fall on it from her brush. The effect is similar to pointillism, in which artists paint using patterns of tightly-packed dots.

Sarah said: “I took a bit of a gamble on art once the children were older and I was lucky to be picked up by a couple of galleries quite quickly.

“I’d changed careers before so it wasn’t a completely new experience. When I decided I’d had enough of full-time hairdressing, I basically swallowed the Royal Horticultural Society guide to plants as quickly as I could and threw myself into it.

“Over the years, I worked at a lot of gardens around Henley and Shiplake but I was finding it increasingly tiring so it was time to move on.

“I’ve always painted big, with 90 per cent of my paintings measuring a square metre or even larger. I don’t know why but my brain just thinks that way — I love colour, light and life and find that resonates best on a large canvas.

“I’m forever glad that I made the change because I adore my job. I’m painting five or six days a week, seven or eight hours a day, and I’m always looking to explore and grow my technique.

“I hope I’ll be able to do it until I’m 80 because I love letting the creativity flow out in whatever direction takes my fancy. It’s a privilege to be able to do that for a living.”

Last year, she was commissioned to paint a mural along a wall at Goring station, which played a decisive role in the village winning its first national gold award in the Royal Horticultural Society’s Britain in Bloom contest.