Musician shops in best outfit to raise money for NHS 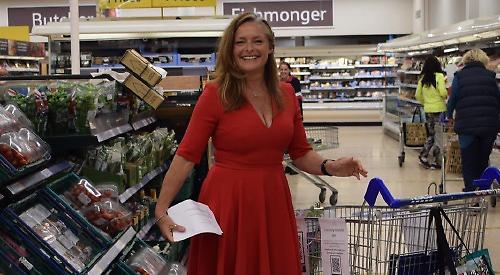 THE founder of Henley Music School wore her best outfit and favourite shoes to raise money for staff working at the Royal Berkshire Hospital in Reading.

She said: “I’m known for loving my shoes so I put on Facebook ‘is it too much to go to Tesco in my favourite heels?’ I had so many comments I thought I could raise some money and set up a fundraising page. A glass of wine may have been involved!”

Her outfit was chosen by artist Camilla Dowse who won a draw among all those people who gave more than £50 who included Mrs Reineke’s father Terry Dudeney and former Henley mayor Glen Lambert.

Mrs Reineke said: “It’s quite difficult pushing a heavy shopping trolley in very high heels and I did get some very funny looks.

“I had posters on the trolley with a QR code so people could donate but some people didn’t read them and must have thought ‘what is she doing?’ In fact, it was my one trip out of the week and it was great and worth doing.”

Mrs Reineke, who lives in Berkshire Road with her husband Antony and three children, said the money would go towards mental health support for staff working on the frontline at the hospital.