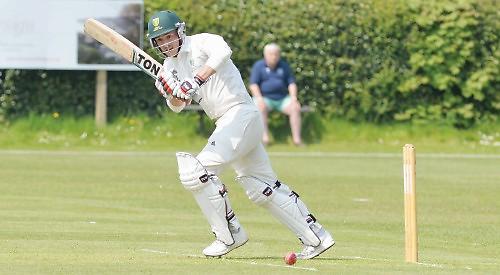 THE captain of Henley Cricket Club ran the equivalent of a marathon around its ground and raised more than £5,000 for the club.

Mike Roberts, 31, began the challenge at the Brakspear Ground at 9am on Saturday, watched by about a dozen supporters.

Both men ran more than 100 laps of the ground in Matson Drive and were joined along the way by fellow players Euan Brock, Stewart Davison, Matthew Rowe and Felix Watson-Smyth. The supporters, who observed strict social distancing, helped the men by giving them water and energy gel from the sidelines and applauding when they needed encouragement. Mr Roberts said: “We got round but it was heating up towards the end. It was really great having a few guys to run it with and a few people in support. People were clapping every time we did a lap, which helped to distract you from the pain of it all.”

Mr Roberts wanted to help the club get through the summer because the cricket season has been delayed by the coronavirus pandemic and the cancellation of Henley Royal Regatta means it has also lost its principal income source as it usually lets the ground for parking during the event.

Mr Roberts said: “We exceeded our £2,000 target and it was really nice to see people from outside the club who live in the area supporting us.”