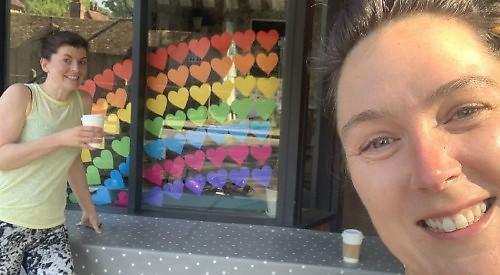 A PHARMACIST who was struck down with covid-19 is about to finish running 200km in aid of doctors and nurses who are treating people with the disease.

Jacqui Little and her friend Imogen Uttley, both from Goring, have been running on and off since early last month.

They are on schedule to complete the full distance by running the final 21km along country paths around the village this Sunday.

The pair call themselves the “Rainbow Runners” after the symbol of public support for the NHS during the coronavirus crisis.

So far they have raised just over £1,500, more than three times their original £500 target, for the Royal Berkshire Hospital.

The women have been running together for about a year and were due to compete at the RunFestRun half-marathon at Windsor Great Park this weekend but this was postponed when the lockdown was announced in March.

Instead they decided to test their endurance and help the NHS as Mrs Little’s husband Mark is a radiologist at the Reading hospital and has been taken off regular duties to treat coronavirus patients.

The couple, who live off Gatehampton Road with their children Freya, eight, and Henry, four, both had to self-isolate for a week in late March when they developed covid-19 symptoms on the same day.

Mr Little, who tested positive for the virus, suffered a fever, aches and a cough which forced him to take a few days’ rest.

His wife was less badly affected, although she lost her sense of taste and smell and is still slowly regaining them.

Despite being unwell, they continued to teach their children at home two days a week and were fit to go back to work after seven days. During their self-isolation, friends and neighbours did their shopping.

Mrs Little said: “In some ways we were lucky as it was very mild and hopefully we will at least have a period of immunity.

“It wasn’t easy recovering and home-schooling the children at the same time but our friends were brilliant at checking in regularly.

“Mark was probably slightly worse and it wasn’t too bad for me — under any other circumstances I’d have been well enough to take a paracetamol and stay in work.

“I am a bit concerned about losing my sense of smell as I still have to put my nose up close to everything.

“We stocked up on some of the essentials before lockdown started and we’re lucky to live in a close-knit community where people look out for each other. Everyone did their bit and we never worried about running out of anything.”

It then dawned on the women that they had been running together such a lot, they could put it to good use.

Mrs Little said: “We want to support the Royal Berks as it’s our local hospital and being near London means a lot of people locally have been affected by coronavirus.

“It’s a new disease with no cure or vaccine so we can only treat the symptoms and hope people’s immune systems react appropriately and not in an extreme way, which is what causes breathing
difficulties.

“Mark works a lot with planned operations and in research, both of which have been put on hold to a degree.

“Many people’s regular work has been ‘parked’ to focus on this — they’re being asked to draw on skills that they weren’t necessarily using recently but had done in the past. There has been a huge influx of people needing chest
X-rays and Mark has also been going into intensive care to deal with complications like putting drains in, so it’s quite a change of role.

“He works long hours anyway so it wasn’t too different in that respect.

“A lot of his colleagues came down with the virus so everybody else had to ensure there was cover but doctors are used to that. They don’t just clock in and off at set times because often they’re faced with situations that can’t wait.

“The NHS has coped amazingly well with the outbreak but everything else has been on hold and they’re now encouraging people to come into hospital if they need to because at one stage hardly anyone was attending A&E. They want to get back to some kind of normality.

“It has been an upsetting period for the staff but they’ve done us proud and shown the service in a positive light. Now it’s just down to the Government to support it with more actions, not just words.

“We’re hoping something positive will come out of this because there has been a real outpouring of appreciation for health workers. You’re nothing without your health but the service is underfunded at the moment.”

Mrs Little, who manages a pharmacy in Oxford, said her own job had been made tougher by the outbreak.

She said: “The hardest time was just before the lockdown because everyone was panicking after seeing what was happening in the rest of the world.

“They were trying to stock up on things like paracetamol or hand wash and it got pretty crazy.

“They weren’t always very understanding and didn’t practice social distancing. We had to limit customer numbers and the phone wouldn’t stop ringing — it was total chaos for a few weeks.

“Once lockdown came in, we introduced a ‘closed door’ policy with people knocking and us bringing orders out to them, which involved more walking around but kept the shop a lot quieter.

“It improved as people realised there weren’t any supply issues and the few small problems were just caused by panic.

“We now spend the first hour of every day and our lunch hour cleaning and tidying. Our delivery service has increased hugely because lots of people are self-isolating or shielding. However, people are really pulling together and being helpful. It’s nice to come to work now that it has settled as it’s easier than home-schooling children. I think they need to get the schools open again because we’re going to have to live alongside this virus for some time.

“It’s really affecting the economy and people’s mental health, which is why exercise is so good for Imogen and me right now. It’s an opportunity to get outside and forget what’s going on.”

Mrs Little took up running in 2018 by following the NHS’s Couch to 5k programme, which guides participants towards running 5km non-stop over a period of about nine weeks.

It took her about six months as she had to balance it with work commitments but she loved it and eventually started running with Mrs Uttley, whom she met through Streatley Primary School where their daughters are friends.

Their weekly mileage varies depending on how they feel and how much free time they have.

They often run together but at a distance greater than the recommended 2m as running carries a higher risk of transmitting the virus. “It’s actually quite tricky fitting in this challenge around our lives,” said Mrs Little. “I can’t leave the children at home and Mark is often busy so we can often only do two or three sessions a week.

“We did 18km during the last working week, then went out last weekend as well but this week we’re doing less so that we’re ready for the half-marathon on Sunday. The weather’s looking okay so we’ll probably just get out early and get it done.

“We’re getting a lot of support from the village and it’s nice to focus on something else with all this madness going on.

“I never thought I’d end up becoming a runner two years ago but apparently I am now and I’ve got into things like Pilates off the back of it.

“It’s great for mind and body, particularly during this lockdown, as it’s daunting to be stuck inside all day, every day.

“We’re pleased that we raised three times our target — we didn’t go too high as it’s a difficult time for people financially and we didn’t want to set something unachievable.

“We’ve been very impressed by Col Tom Moore’s incredible efforts and hope people will get behind this story. When you’re supporting something worthwhile, it feels very fulfilling each time you put your trainers on.”

Mrs Uttley, a business manager, who lives with her husband Simon and their children, Finley, 12, and Tallulah, eight, got into running when the family moved from London three years.

She said: “Jacqui and I had always talked about doing some kind of half-marathon so when ours was cancelled we wanted to do something else as we’d done all that preparation.

“Supporting the Royal Berks was the obvious choice considering her and Mark’s professions and it has been amazingly good fun.

“It has been a good way to stay fit during lockdown as the weather has been wonderful and I need to be ‘socially distancing’ from the fridge at the best of times!

“We’ve been hugely motivated by the support of the community. There have been days when I haven’t wanted to get out of bed because I’m so sore but I’m spurred on by people’s kindness.”