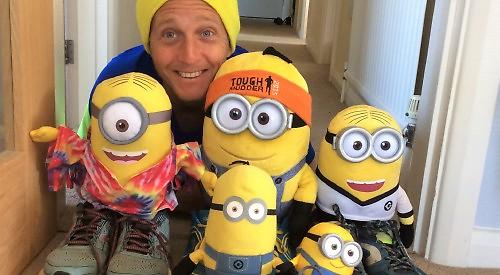 A HENLEY man has raised more than £4,400 for the NHS by staging a triathlon in his flat.

Nick Harrison completed 23 miles on a rowing machine and 874 miles on an exercise bike.

He then ran more than 1,400 laps of the first-floor property off Wargrave Road, totalling a marathon distance of 26.2 miles.

Mr Harrison, 42, took 10 days to complete the challenge, which he called the Bonkers British Triathlon.

He would exercise for up to nine hours at a time while watching television to keep himself motivated.

Because nobody could visit the flat to cheer him on, his partner Camilla Edgell decorated it with an “audience” of stuffed toy Minions from the Despicable Me film series.

During the run section, in which he completed a 30m circuit along the corridor and through the kitchen and another room, she put up drawings of landmarks such the Tower of London, the Cutty Sark, the Shard and Buckingham Palace which are on the London Marathon route.

The couple, who work together in event catering and management, came up with the idea a few weeks into the lockdown but struggled to work out how Mr Harrison could complete the swim section.

They eventually decided he could row the width of the Channel using their old rowing machine. This took him about 11 hours over two days.

Mr Harrison completed the cycle ride on an Eighties exercise bike which had belonged to his late father Bill.

He completed the equivalent of riding from Land’s End to John O’Groats. The seat was cracked and uncomfortable so he used various household items as padding but still found the experience painful.

Mr Harrison took his mind off the pain by “binge watching” television shows including Only Fools and Horses, Ross Kemp’s Extreme World and I Am Bolt, a documentary about champion sprinter Usain Bolt.

He ran the marathon in about nine hours over the final two days.

Mr Harrison warned his neighbours about the noise in advance and many agreed to sponsor him.

He said: “I wanted to make a difference and this was the obvious way to do something tricky while staying indoors.

“We thought up all kinds of arrangements involving cushions for the ‘swim’ but they weren’t very practical so the row was a sensible alternative.

“That machine is more like the real thing than an ergo and I haven’t really done much rowing so it was pretty tough. Camilla tried it for a few minutes herself but couldn’t keep up for long.

“I was very relieved to finish that section as it was much harder than expected. It forced you into an awkward position and rattled about a lot so I don’t think I’ll be using it again — if I want to row I’ll upgrade to an ergo.

“The bike was so old that I remember it from when I was much younger and it was impossible to get comfortable.

“We tried everything — cushions, you name it, even a washing-up sponge from the kitchen, but I was always having to shift around. On a real bike ride you’d get to stand in the saddle from time to time but this was pretty relentless. I was so delighted to finally get off it and my knees were really playing up at the end.

“I did the run in a knee brace and we crossed off every 10 laps on a piece of paper as it would have been impossible to keep track in my head.

“I was so pleased to finish and totally exhausted when the adrenaline wore off as that had been keeping me going. It was worth it because we got a lot of support, which I’m very thankful for.”

Mr Harrison has competed in many endurance events, including the 2012 Challenge Henley ironman triathlon and more recently the Athens Marathon.

Last year, he completed the Fan Dance, a 15-mile march twice up and down Pen y Fan in the Brecon Beacons while carrying a heavy rucksack. But he found his latest challenge mentally tougher because it was indoors.

“The monotony was incredibly difficult because I wasn’t outside,” he said. “I love being outdoors and seeing new places whereas this was just staring at a wall or the television.

“Not being able to see anything or appreciate any scenery was hard because there’s nothing to take your mind off what you’re doing.

“I’m incredibly grateful to Camilla for keeping me entertained — it was a real team effort.”

Miss Edgell said: “I’m so proud of Nick for finishing and very impressed with the determination he showed in pushing through. I doubt I could have tolerated so many hours.”