Tearful reunion (at a distance) 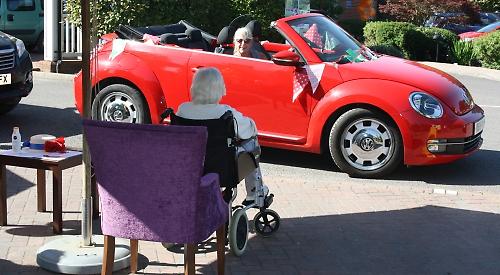 RESIDENTS of a care home met their families at a special drive-through event.

About 40 families attended the meet-and-greet day organised by Sunrise of Sonning on Friday following the easing of some lockdown restrictions.

There were emotional scenes as they met their elderly relatives for the first time in 11 weeks.

The visitors were asked to queue in their cars outside the entrance to the home in Old Bath Road and wait for instructions to come into the car park. Then only five vehicles were allowed in at once.

The cars filled with families pulled up next to the residents who were sitting in chairs under umbrellas to protect them from the sun and surrounded by orange balloons and bunting.

The residents remained seated while the families had to stay in their vehicles to obey the 2m social distance rule but could open the windows so they could speak to each other.

Some of the visitors and residents were in tears as they waved, smiled and blew kisses at each other.

Many visitors had decorated their cars with bunting and messages and the home’s staff had decorated the Sunrise minibus with a message for the families that read, “Welcome back, we missed you”.

Joan Jacobs, 88, who has lived in the home for two years, was visited by her son Mike and granddaughter Poppy, 19, from Henley.

Mr Jacobs said: “It was pretty amazing just seeing her face to face. I have not seen her since March. We do a video conference every week but it’s not the same.

“My mum has very severe dementia so I think she was a bit bemused by the whole thing. She did recognise us and we talked about what she used to do in the past as a lacemaker.

“It was just nice to see that she’s well and happy, calm and relaxed.”

Poppy added: “It was so nice to see her again.”

Mr Jacobs praised the home staff for organising the event, saying: “It’s brilliant and they have done a really fantastic job in such incredibly difficult circumstances.

“I’m very grateful for what the staff have done today and over the last two years. They do an incredible job.” Constance “Curly” Williams, 95, celebrated her birthday, which was two days before, with her daughter-in-law Sally Castle, who arrived in her red Volkswagen Beetle draped in bunting.

She was presented with a cake by staff who sang Happy Birthday with Mrs Castle before the women chatted.

Mrs Williams, who lived in Wargrave before she moved into the home two years ago, wore a sign around her neck which read “lovely to see you” beneath an image of a rainbow, a symbol of hope during the crisis.

She said: “I can’t believe it — it’s superb. It’s been a long time without visitors.”

Mrs Castle said: “It was really emotional. I was quite choked up because we’ve not seen each other in about 10 weeks.

“It’s nice to make sure she is feeling well and I’m hoping things get back to normal soon.

“This was lovely and couldn’t have been done better. The staff are just amazing, really helpful and kind.”

Rosemary Thorpe, 88, who only moved into the home a week before the lockdown began, was visited by her daughter Alison Watkinson, 59.

Mrs Thorpe said: “It was wonderful to see her. She was happy and said, ‘oh mum, you look so nice with your hair done’.

“I caught up with a lot of news about the family like what they were doing and how they were.

“We have been doing emails but it’s so nice to be face to face with her.

“I really want to thank the team. They organised it so beautifully and all the carers are so helpful.”

Jeanette Darke, 81, was visited by her daughter Lindsay Thomas and her family, from Windsor.

Mrs Thomas had to wipe away tears when she saw her mother and she waved at her from the window of her Nissan with her husband John and their children Grace, nine, Evelyn, seven, and Molly, three. Mrs Darke waved back with activities assistant Carol Green and then they chatted.

Mrs Thomas said: “It was really emotional. It’s something quite special because we’d not seen her for three-and-a-half months and we’re a very close family. Normally we visit every week so it has been really tough.

“We have been FaceTiming mum every week and I think the first couple of weeks she didn’t understand what was going on because she has dementia.”

Pam Bridgeman was visited by her daughter-in-law Elizabeth and her son Alex. She was also presented with a cake to mark her 80th birthday the previous day.

Mrs Bridgeman Jnr said: “We had already sent her flowers, presents and cards.

“It was lovely to see her and she was looking really well. She didn’t say a lot but she smiled and was obviously very pleased to see us.

“We want to say a massive thank-you to the staff, who work really hard and this was a wonderful thing for them to do.”

Organiser Gai McNeile said: “It was absolutely fabulous to see the smiles on the residents’ faces and their families. It was such an emotional time.”

General manager Carmela Magbitang said: “There was a very happy atmosphere and a lot of emotion. It’s very emotional for the staff too because they can see how it makes the residents feel.

“We all consider the residents here to be family and if they’re happy, we’re happy.”

The home, which has about 100 residents and 150 staff, has been closed to visitors because of the coronavirus crisis since March 17.

Nine residents have tested positive for the virus during that period and two have died from unrelated conditions.