Race called off for first time in 38 years 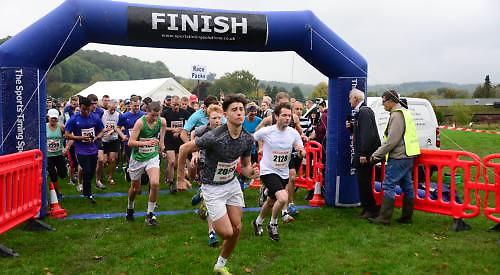 THIS year’s Henley half marathon and 10km have been cancelled for the first time in its history because of uncertainty over the coronavirus pandemic.

The 38th annual event, which is organised by the Rotary Clubs of Henley and Henley Bridge, was due to be held on Sunday, October 11.

Hundreds of runners typically take part in the races, which start and finish in Borlase Field, next to Henley Rugby Club, off Marlow Road.

The clubs said the uncertainty over rules relating to mass gatherings had forced them to act.

Peter Wilkinson, a member of the Rotary Club of Henley Bridge, said the committee overseeing the event had considered holding the races next spring but decided this was not feasible.

He said: “Because it has traditionally always been held in October we thought we’d stick to that and put the whole thing back a year.

“We’re not alone. If you look at the schedule of running events throughout the summer and autumn, they have all been postponed or cancelled.

“It’s the uncertainty over the way this pandemic is going to affect mass gatherings. We’re so reliant on the goodwill of the rugby club, the Borlase family and Fawley Court and if for any reason any of those decided they couldn’t accommodate us we would be in a great deal of difficulty.

“We’re still not convinced there’s going to be complete freedom of movement and I don’t think we could be seen to be going against the grain of public opinion.

“We have had to make sure the people who do the chip timing for us are okay for 12 months’ time and we have had to do some initial research on the availability of the rugby club, Borlase Field and Fawley Court and discuss with the county council the road closure situation. We feel pretty confident it will work.

“The website is open now to enable entries for 2021 so we would encourage people to take part.”

Mr Wilkinson said there had been a few dozen entries for this year’s half marathon and a handful for the 10km. These would be rolled over to next year or the entrants could claim a refund.

He said: “In the past, the majority of people who haven’t been able to take up their entry roll over to the following year or, if they can’t do that, they have been quite happy to leave their donation in the pot for charitable purposes. I think the majority who have been in touch have fully understood the position.”

He said the decision to cancel the event had been made early enough to avoid any financial impact on the clubs.

Mr Wilkinson said: “We haven’t laid out money for medals, toilet hire or the road closure. There are few costs we will meet but these will be covered.”

Over the years, the event has raised thousands of pounds for good causes, including the RNLI, Sue Ryder, the Nomad youth and community project and last year’s recipient, the Blood Bikes charity.

Mr Wilkinson said the clubs were looking at the possibility of running a virtual event to raise money for charity this year.

Next year’s races are scheduled for Sunday, October 10. To enter, visit
henleyhalfmarathon.org