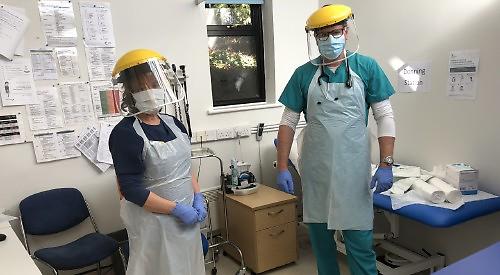 A DOCTORS’ surgery in Henley says it has been “inundated” with calls for covid-19 tests.

Staff at the Bell Surgery say more requests are coming in when the number of cases of coronavirus nationally is rising and when they are already very busy giving flu vaccines.

Dr Shellani Knight said schools had been given “misleading” information on what to do if pupils showed symptoms.

She said: “I can’t give you an exact figure but our phones are really busy.

“If they are phoning up with a testing issue, we won’t be able to help them. The only thing we can do is direct them to 119 [the NHS test and trace line], which is also very busy.

Dr Knight, who has a child at Trinity Primary School, said: “The schools have all been sent the same information and it highlights what they should do but it is not the correct information. It is very misleading for parents.

“What would really help is if we could guide the public towards 119 because we can’t help them. If you call up and you can’t get through, don’t get despondent and keep trying.”

The total number of covid-19 cases in South Oxfordshire since March has risen to 678 this week, an increase of 10 over the last seven days.

In Reading, the number of confirmed cases went up by 22 to 912 in the last week.

The city of Oxford is back on amber alert, which happens when cases rise above 25 people per 100,000 of the population.

Nationally, hospital admissions for covid-19 are on the rise and infections are becoming more common among older people. Dr Knight believes the Government needs to improve the testing system urgently.

She said: “I do think it has been inadequate and I think it would help hugely if there was a better service for testing. Key workers and NHS staff can get back to work and so can parents that are having to self-isolate and work from home.

“It is having a knock-on effect on everybody and I think there needs to be a significant improvement. They are trying to increase capacity for testing locally due to the rising demand.

“We are certainly worried as a surgery that things could go in the wrong direction and we are putting things in place to make sure things can run as smooth as possible.

“Often patients display symptoms because of the change in seasons when colds and flus come into play and then they have to self-isolate with their family because they can’t get a test. That is having a knock-on effect on the surgery and it is a concern that they can’t get tested.”

The Hart Surgery in Henley has also received many calls about virus testing.

Sarah Moberley, practice manager, said: “We can’t offer tests and we have no facility or lab to send things to, so we are unable to help.

“I do think the testing has been abused. I’ve heard so many anecdotes about people who have come back from holiday or who want to go and see an elderly relative and they think about getting a test just to be safe when they don’t have any symptoms. There are people who are more in need of them and that has not helped.”

On Tuesday, the surgery managed to administer 700 flu vaccinations to adults aged 75 and over and others deemed high-risk aged 65 or over. This was the most vaccinations it has ever given in a day.

Mrs Moberley said: “We used a new format this year with five clinicians who were continuously vaccinating and doing it on a walk-in basis with no prior booking and a one-way system.

“We were all quite worried because we had no idea how many people would turn up and we have never done it like that before.

“We thought 700 would be at the more optimistic end of the scale and that was exactly what we got. There were only a handful of people who had to wait for 10 to 15 minutes and most didn’t have to wait at all, so I think we got the balance just right.”

The surgery has around 10,500 patients and about 4,000 would normally be suitable for a free flu jab.

However, this year people aged 50 and over have been made eligible, which means another 2,000 people could request a free jab.

Mrs Moberley added: “Our target is to vaccinate 75 per cent of eligible people and NHS England is very concerned if there is a second wave of the virus that coincides with the flu.

“When we order our vaccinations at the start of the year, we weren’t aware of that additional group. We have tried to prioritise those who are at the highest risk.

“There is a worry that there won’t be enough vaccinations for everyone. We ordered our first lot straight away but we had no idea at the time that a pandemic would take hold as it did. In addition, some people who have previously dismissed the idea of having a jab may want to have it this year.”

Meanwhile, the Government introduced the rule of six on Monday, making it illegal to meet in groups of seven or more. This is in response to the rise in the number of coronavirus cases nationally.

Sone experts are now warning that another lockdown could happen if the trend continues. People aged 20 to 29 account for about one third of all coronavirus cases and there are fears the virus will be more prevalent during the winter months.

Henley MP John Howell said: “It is my hope that we will avoid a second lockdown. At the moment, I don’t think it is a real risk.

“We have to expect the best and prepare for the worst; if you do that I think we will maintain the effort of health and safety that we have been doing from the beginning.

“If people stick to the six-people rule it will have a major impact but I’m not going to anticipate what the Government might come up with for the future.

“We are quite a bit behind what is happening in places like France and Spain in terms of the number of cases. It was not a very enjoyable thing to see the number of deaths go up on Tuesday, but one day can’t be used to form a trend and it is important not to make long-term predictions based on it.”

Mr Howell said he was aware of the problems with testing, adding: “We are dealing with a situation that has never happened before. Even the medical professionals, whom the Government relies on for advice, need to acquire more knowledge.”