We completed the London Marathon without even setting foot in capital 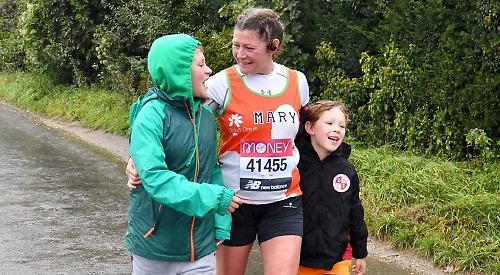 RUNNERS from the Henley area took part in the virtual London Marathon on Sunday.

They were among thousands of people across the country who ran their own routes at home after the actual event in April was called off due to the coronavirus pandemic.

The organisers asked participants to download an official smartphone app to record their times and distances, which means they will receive finishers’ medals marking the event’s 40th anniversary.

The runners braved persistent rain and strong winds in order to complete the 26.2-mile run, raising thousands of pounds in the process.

Jason Cuthbert, 44, of Harpsden Road, Henley, ran several times between Henley and Aston in a time of four hours, 11 minutes and 20 seconds.

He was greeted at the finish in front of Leander Club by his wife Helen and their son, Henry, three.

Mr Cuthbert said: “They were the worst conditions I’ve ever had for an event. Remenham Lane was flooded, the towpath was flooded and there was a pretty strong headwind.

“There were lots of other marathon runners out there and some of them looked far too cheery. We gave each other a wave and it was nice to see people out.

“It was totally different with there being no crowds and you just had to force yourself to carry on running.

“I almost got under four hours but I had severe cramp, so I had to stop with three miles to go and stretch my legs.

“I was absolutely frozen and shaking at the finish. I felt horrendous and was glad it was over.”

Mr Cuthbert, who ran the London Marathon six years ago, was contacted online by Peta-Ann Duncan, from Henley, beforehand to ask if she could join him for the last 10 miles.

“She asked if I would like some support,” he said. “I told her that I am a fairly solitary runner but she was willing to accept that I would be plugged into my headphones.

“Then my headphones broke, so I had no motivational music to lift my spirits, but she kept talking to me, which was great.

“She was pacing me and running in front to reduce the impact of the wind and gave me some words of motivation as we were coming down the towpath.

“I’m not sure I would have finished without her — she was a superstar.”

Mr Cuthbert, a tax advisor, raised £2,000 for the Miscarriage Association, which he was supporting as his wife has had six miscarriages in four years.

The charity offers support to families going through the loss of a baby during pregnancy.

Mr Cuthbert said: “Every time I was struggling, I thought about the reason I was running and that helped.”

To make a donation, visit bit.ly/36iiwNP

Hairdresser Kelly Hargreaves, 54, ran her marathon with her husband Ian, 57, who is a landscape gardener.

The couple, who live in Newtown Gardens, Henley, ran along the Thames from Windsor to Henley. They finished in five hours and four minutes, which was a new personal best for Mrs Hargreaves, who had completed the London Marathon four times previously.

She said: “Conditions were pretty horrendous and at one point the mud was up to my ankles.

“I’ve used that riverbank so many times — it is my training ground —  and it has never been as bad as that. Hurley was probably the worst part. We were just running through floodwater and that is what really pulled us back.

“It probably wasn’t the time we were hoping for but it was pretty good considering the conditions. I’m going to have to bin my trainers.

“We started just after 8am and stayed together all the way. We finished outside Hobbs in Henley but the app wasn’t exact.

“Ian’s definitely didn’t work because apparently he finished four minutes after me, but it doesn’t matter because we will still get the medals. It was certainly an experience.”

The couple’s daughter Millie, 19, drove them to their starting point and they were cheered on by family and friends at different points along the way, including Maidenhead, Cookham, Marlow and Hurley.

Mrs Hargreaves said: “A lot of people worried about the lack of a crowd because it does get you round when you hit the wall but because we had so many people out on the course, it was still an amazing experience.”

The couple were running for MACS, a charity that supports children born with under-developed or no eyes. So far, their online fundraising page has reached £1,663.

Mrs Hargreaves, who overcame breast cancer for a second time this year and had a lumpectomy and radiotherapy, said: “Charities have really struggled this year, so the money is even more important.”

To make a donation, visit uk.virginmoneygiving.com/KellyHargreaves

Mary Galer, 40, who runs the Miller of Mansfield pub in Goring, ran from her house in Streatley through Moulsford, Cholsey, North and South Stoke and Goring twice.

Her husband, Nick, and children, Elliot, 11, and Monty, seven, supported her along the way, as well as her parents, Susan and Michael Reed, and her older brother Christopher.

She finished in four hours, 36 minutes and 32 seconds.

Mrs Galer said: “I was very happy with that. I had no expectation of what I would get and I had nothing to compare it with because I’ve only ever done a half marathon before.

“I estimated five hours but given that it was virtual with all the rain I was very happy.

“Going north towards Oxfordshire was fine, but coming south was very exposed and there were lots of puddles on the road.

“I started to hurt at 16 miles but I decided if I stopped I might not get going again. The hills were undulating and it hurt, but I just kept going.”

Mrs Galer raised more than £3,500 for Daisy’s Dream, a Twyford charity which supports children and families through bereavement.

To make a donation, visit
justgiving.com/fundraising/mary-galer1

Tereena Hartin, 45, from Caversham Heights, completed her marathon in five hours and 10 minutes. The personal trainer ran from her home to Sonning Common, where she grew up, and back twice in order to achieve the required distance.

She was joined by her brother, Stuart Gibbon, and 11-year-old nephew, Hugh, for the second half of the run.

She added: “Considering the puddles that we ran through, I was quite impressed with my time.

“All the lanes were flooded. At one point a puddle went up to my knees but it was too late to change my route.

“My brother and I have been doing long-distance running since we were kids and he just kept my spirits up.”

She was running for the Children and Young People’s Diabetic Clinic and the Royal Berkshire Hospital in Reading, where her daughter Olivia, 17, has received support for the last 15 years.

Olivia has type 1 diabetes and she will move over to the adult clinic next year.

Mrs Hartin and her husband Darren, a cyber security manager at Invesco in Henley, also have a 13-year-old son called Max.

She said: “This was my way of saying thank you to the amazing team at the Royal Berks. It is a very personal charity. The support and care they provided us as a family havebeen amazing.

“People don’t know enough about diabetes and it is often lumped together with other conditions. Type 1 is catastrophic and life-changing, whereas type 2 can be managed by diet and lifestyle. It is a horrible time when you are diagnosed and Olivia was only two-and-a-half.

“Without the support the clinic has given us over the last 15 years, we just wouldn’t be where we are.”

To make a donation, visit bit.ly/34xe0sy

Emma Cutler, from Wyfold, ran her marathon in Portsmouth with her friend Cortney Blackburn, who was visiting from Canada.

The 30-year-old nanny, who took part in the London Marathon two years ago, finished in four hours and 35 minutes.

She said: “Having Cortney alongside helped hugely. We ran half of it together and then we split and finished the other half individually.

“Despite being like a drowned rat at the end of it, I found it actually quite fun.

“We got quite a few cheers from people passing by and there were some other people out running at the same time.

“I didn’t really have a time in mind because I didn’t know the route and I didn’t put any pressure on myself.”

She raised just over £2,000 for Round Table Children’s Wish, which offers opportunities to children with life-threatening conditions.

Miss Cutler said: “As I work with children, it was quite fitting and a special charity to run for because they provide experiences for children who might not get them otherwise.