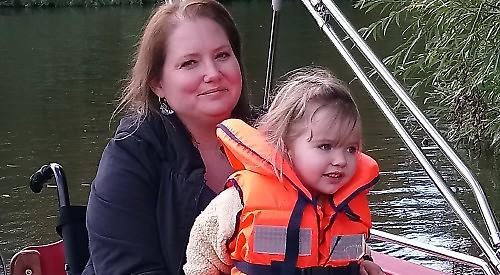 SINCE launching Floatability, Laura Howard has had to use a wheelchair herself temporarily after developing complications from coronavirus, writes James Burton.

She caught the disease in April, a few weeks after the lockdown was imposed, and while her symptoms were initially mild, she began to suffer increasing fatigue instead of gradually recovering.

After also experiencing an insatiable thirst for months, she reached the point where she could barely walk a few steps or hold a conversation before getting so exhausted that she had to rest.

She visited her doctor at the end of June and was eventually diagnosed with post covid-19 syndrome, also dubbed “long covid”, which is thought to affect about one in 10 sufferers.

It is similar to chronic fatigue syndrome, which often follows a viral infection and leads to “post- exertional malaise”, or tiredness after movement.

Causes vary from person to person but can include lung damage or a disturbance in the immune system which causes inflammation throughout the body.

Mrs Howard can now walk short distances before using her wheelchair or a mobility scooter and expects to fully recover, though it isn’t clear how long this will take because the illness is so new.

Mrs Howard said: “It’s very much a day-by-day thing. Hopefully, they’ll refer me to a specialist clinic but there’s so much research going on and it’s saying different things.”

The couple recently took their boat on a test cruise on the Thames and Mrs Howard found it therapeutic.

She said: “The only silver lining from this is that it was useful for me to see it first-hand and consider what we could do to make it as accessible as possible.

“I didn’t have much energy and struggled to stay awake but I got a lot out of being on the river and surrounded by the river and birds. It really brought home the value of what we’re doing.”

Mrs Howard had no idea how ill she would become having only had a slight temperature to begin with.

She said: “It was a massive shock. I didn’t really think much of it when I first isolated myself but after three or four days I had a terrible thirst and it got worse from there.

“The main problem was that I was incredibly sleepy. I kept needing to rest for 30 minutes or more and it didn’t matter where — on the floor, on the stairs or wherever.”

Her doctor assumed it was a hormone imbalance so ordered tests but Mrs Howard continued to decline until she was drinking more than four litres of water a day.

She called 111 and was taken to hospital by ambulance, where doctors put her on a saline drip which finally reduced her thirst. A chest X-ray revealed markings on the outside of her lungs which was most likely a result of the virus.

“The doctor said they were seeing a lot of it,” said Mrs Howard. “It develops about a month after you become ill, which fitted almost exactly with my onset and progression.

“There’s not an awful lot that people can do at the moment but I’m glad to be improving. A few weeks ago, I wouldn’t have had the energy to have this conversation.

“It was a very frightening experience because I didn’t know what was wrong with me. There’s still uncertainty but at least I have the reassurance of knowing what’s wrong and that it’s not life-threatening.”

Earlier this month, the NHS announced it would be spending
£10 million on setting up a network of clinics across England to diagnose and treat post covid-19 syndrome.

It has launched an online “hub” for people to track their recovery and seek advice and will be funding research into the condition.