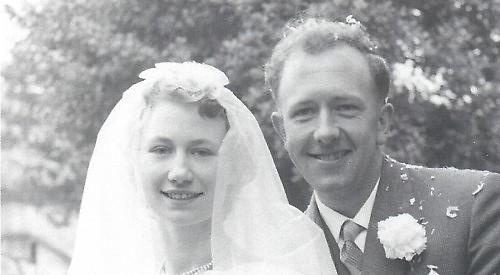 A COUPLE from Sonning Common celebrated their 60th wedding anniversary with members of their family.

Bill and Gwen Bowman enjoyed a surprise buffet at their daughter Angela’s home in Kennylands Road.

The couple received gifts from their family and a letter of congratulations from the Queen.

Mr Bowman, 93, had paid to replace one of the diamonds in his wife’s engagement ring, which had to be cut off her finger as it was too tight. The couple met in the summer of 1959 at Lilleshall Hall National Sports Centre in Shropshire, where Mr Bowman was learning tennis and Mrs Bowman was being coached in table tennis.

They were married on October 29, 1960 in Paulton, Somerset, where Mrs Bowman is from.

The couple first lived in Kensington in London before moving to Staines in Middlesex. They moved to Reading to fit in with Mr Bowman’s job in insurance and then settled down in Sonning Common, first in Westleigh Drive before moving to their current home, which is also in Kennylands Road.

The couple had four children, Linda, Susanne, Jason and Angela, and now have nine grandchildren and one great grandchild.

Tey like to spend their time with family, doing gardening or playing golf. Mr Bowman said: “When I retired from the insurance company at the age of 60, they gave me a golf trolley and all the equipment, so I thought I best get out there and start playing.

“Spending time in the garden helped us get through the lockdown — it has been a lifesaver.

“We haven’t visited Somerset since lockdown and we can’t do any travelling now. A couple of Gwen’s sisters did come and visit and sat socially distanced in their masks but that was it.

“The family visits occasionally but they obviously can’t stay but Angela lives in the same road.” One of the couple’s favourite memories is the day that Mr Bowman proposed.

He said they had been staying with Gwen’s family for the weekend and were in the car on the way home when they had an argument.

“I just said, ‘Stop the car, we’re getting married’. There was a silence and I thought I’d blown it.”

Mr Bowman said the secret of a long and happy relationship was a good sense of humour, adding: “It is the yeast in the bread of marriage.”