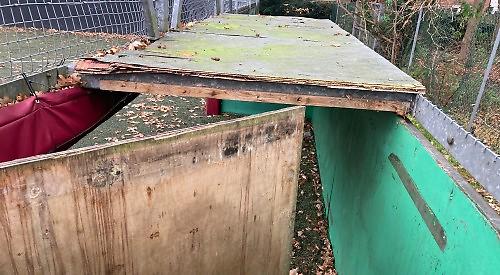 VANDALS have damaged property at Henley YMCA’s tiger turf pitch for a second time this year.

The wooden boards behind one of the goals were broken to allow the culprits to get inside. The same thing happened at the opposite goal in April.

The tiger turf pitches are surrounded by a 9ft wire fence, which the vandals must have climbed over.

The damage was reported to Lisa Grant, general and financial manager at the YMCA in Lawson Road.

She said: “Someone has jumped up and down on the boards behind the goals so they could gain access to it and they’ve left rubbish and beer cans in there.

“There was a group of six to 10 lads on the pitch in November and they weren’t social distancing and they shouldn’t have been out anyway as it was the lockdown.

“Not only were they trespassing, they were breaking the law.” Mrs Grant said that two occasions she had to tell a group of young men to leave the private pitches, which were temporarily out of use to comply with the coronavirus restrictions.

Luckily, the charity had some wooden boards left over from the last time the goal was broken. It cost them £300 for the labour to fix the goal on top of the £500 it spent in April.

Mrs Grant said: “We’re not made of money. We haven’t had an income for the last five months.

“We are a charity and here to provide a service for vulnerable young people.

“If people want to play on the pitch, they can come and ask and we’ll open the goals up for them for, say, £2 each with no time limit.

“We have no problem with people using it – if you’re 16 or above I don’t think that’s too much to ask.”

She added that the charity couldn’t afford CCTV.