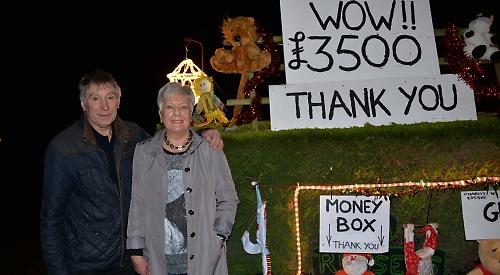 A VIRTUAL carols event is to be held in memory of a Sonning Common man who raised thousands of pounds for charity with his Christmas lights.

John Lambourne, who died in December last year, was well known for the spectacular display he would create outside his home in Kennylands Road.

Visitors from miles around as well as villagers would come to see the illuminations and leave money in a secure donations box.

The display grew in size over the years and featured lanterns, reindeer, Christmas trees, penguins, stars and a Santa’s sleigh.

The lights went on at about 5pm every night and were switched off at about 10pm.

Mr Lambourne and his wife Carole used to give the proceeds to Great Ormond Street Hospital for children in London and raised more than £10,200 in five years.

Now another villager is organising the singing session to honour Mr Lambourne and raise money for the same cause.

Vanessa Stowell, 41, of Peppard Road, went round the village carol singing with her family and friends one day last year and raised £1,000.

She can’t repeat that this year because of the coronavirus restrictions so instead she is holding the carols event on Christmas Eve and hopes to raise more than last year.

Mrs Stowell said: “We are going to do it via Zoom. We will send the link out to everyone on the Facebook page, which is about 60 people.  For the last song, We Wish You A Merry Christmas, we want everyone to stand at their front doors or in their gardens and sing as loud as they can.”

Mrs Stowell, who lives with her husband Adam, 35, and their three children, Bailey, 14, Louie, 12 and Ella, 10, didn’t know Mr Lambourne but the family would go to see his lights every year.

“I took my nan as well when she came to visit,” she said. “I think everyone in the village remembers him. John used to take the money he had raised to the hospital himself to see the children. I hope I can start doing that too when it’s safe to do so.”

The Lambournes started by raising a few pennies for their grandchildren but once the display grew they decided to donate the money to the hospital.

Mrs Lambourne said: “The displays just got bigger and bigger and John even made a few lights himself. I suggested that we did it for somebody and then my husband said it was Christmas and the hospital was for children so it made sense to donate the money to them.

“My son, Gary, has taken the lights down to his house and he has done a display this year to raise money.

“Vanessa started carolling last year. It was very early as my husband had only passed away on December 1 but we did make an effort to go round.  I didn’t even know Vanessa at the time, so it was so lovely of her.”

She thanked Mrs Stowell for her latest initiative, adding: “It’s lovely, it makes me want to cry. John was such a lovely man, we miss him terribly.”

Mrs Stowell said her family would take part in the carol singing.

“They aren’t great singers and I can’t sing at all but we enjoy it.”

The carols event will start at 4pm and the final one will be sung three times from 4.30pm.  The other songs will include Hark the Herald Angels Sing, O Little Town of Bethlehem, Silent Night, While Shepherds Watched Their Flocks by Night, Away in a Manger, Ding Dong Merrily on High, O Come. All ye Faithful and Santa Claus is Coming To Town.

To take part, join the  Facebook page “Christmas carollers”, where all the lyrics will be available.