Covid-19 vaccine given to elderly patients 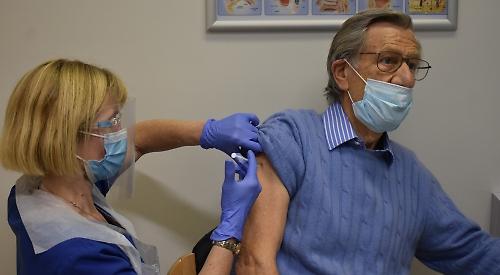 THE first coronavirus jabs have been administered in the Henley area.

Almost 1,000 elderly patients from the town’s Hart and Bell surgeries, Nettlebed surgery and Sonning Common Health Centre were among the first in Britain to receive their initial dose of the Pfizer/BioNTech vaccine on Wednesday.

All the injections were administered at the Henley surgeries off York Road, where volunteer marshals from the Rotary Club of Henley Bridge, the Henley Society and other community groups directed traffic in the car park.

A consulting room at each surgery was set aside for the session so that regular appointments could continue as normal.

Patients queued outside under a gazebo initially then sat more than 2m apart in a waiting area until they were called in at five-minute intervals.

They were offered hand sanitiser on arrival and left through a separate exit to avoid bumping into others.

After receiving the vaccine, which must be stored at a temperature of about minus 70C, they had to wait 20 minutes to ensure there were no ill-effects before they could go home.

Each patient was given a badge stating the time of their injection and sent away with a leaflet explaining the side effects, which are typically mild.

The patients will return in three weeks to receive a second dose, which is required for the treatment to be fully effective.

The surgeries were chosen to be among the first wave of vaccination centres for the over-80s, who are the most medically vulnerable age group, about 10 days ago.

This was because they are among 280 practices nationally with the highest number of elderly patients.

NHS England sent 975 doses, which is a standard consignment. Patients in good health were invited by letter to receive the vaccine while those who suffer from severe allergic reactions were excluded in line with current guidance.

The vaccine arrived on Tuesday and was kept in refrigerators at a secure and secret location in Henley.

Surgeries serving other South Oxfordshire villages, including Goring and Watlington, are expected to follow suit within weeks.

It isn’t yet known when the jab will be available to all over-80s, nor when it will be extended to younger age groups. Those aged between 75 and 80 are believed to be next in line.

Christine and Alun Jones, of Northfield End, Henley, were pleased to receive the vaccine.

Both had to “shield” during the first lockdown, which ran from March to July, and they have only briefly met their children and grandchildren outdoors since the pandemic hit.

Mr Jones, 83, rows for the town’s Upper Thames Rowing Club and is looking forward to getting on the water again. He said: “All sport was cancelled and it has only just started up again. I really missed it all through the summer and we also had to reschedule a holiday we’d booked to France.

“We’re sick of hearing about tiers and lockdowns and this vaccine is a real game-changer. Hopefully by Easter, or at least by next summer, we’ll finally be back to a more normal way of living.”

Mrs Jones, 82, said: “I was delighted to receive the invitation and not at all worried about receiving the vaccine.

“It didn’t hurt and I feel as fit as a fiddle. There’s absolutely nothing to worry about and I would urge people to please, please get it so we can finally move on.

“We were together in lockdown so it wasn’t too bad but while it was necessary, it did mean the end of our freedom and we’ll be so pleased when this whole thing is over.”

Barbara Wright, 82, a retired physiotherapist, of Phyllis Court Drive, Henley, said: “This feels like the beginning of the end of the pandemic and it’s wonderful.

“Hopefully, we can start getting back to normal. During the lockdown I was able to meet people in the garden while socially distancing but once I’ve had both doses I’ll be able to see family and friends that I haven’t been able to. I feel perfectly fine and it’s no different from the flu jab — it’s an exciting time.”

Peter Husband, 83, a retired paediatrician from Nuffield, said: “We feel great and it’s fantastic to get a Christmas present like this. The speed at which the vaccine has been produced is absolutely wonderful. We really hope that people will take it up and that it will be available to everyone who needs it. Some people might say they’re worried about side effects but it’s a far greater risk to remain unvaccinated.”

His wife, Dame Janet Husband, 80, a part-time board member for Spire Healthcare, said she was looking forward to getting out in the New Year but she will still stick to the rules.

She said: “We’re not going to go mad as our family haven’t been vaccinated yet and you never know what could happen.”

Dr Michelle Brennan, a GP at the Hart Surgery and clinical director for all four, said there were far more than 975 patients aged over 80 within the catchment area but this was all that could be offered for logistical reasons. The doses couldn’t go to care homes because it is hard to transport the vaccine safely between sites, although trials are underway to make it possible in future.

She said: “At this stage it’s for those aged over 80 who are relatively well to start with. It’s a novel vaccine and it’s contraindicated for certain people, like those who carry epi-pens [for allergic reactions].

“However, as soon as supply allows, we will try to get it out to as many people as we can.”

Dr Brennan said the day went well and thanked staff for making it a success.

She said: “From speaking to the doctors, people are pleased to have received the vaccination. It is the best line of defence against the virus. Our team did a great job of booking the appointments at short notice and there was a positive response from most of the patients who were invited.

“From the moment I told everyone that we’d been selected for the pilot, they were really excited to be involved and they’ve worked so hard to make it happen while running our normal services.”

The Pfizer/BioNTech vaccine was approved for use in the UK on December 2 and is proven to be up to 95 per cent effective.

Patients aged over 80 at Wargrave Surgery were also among the first wave to receive the vaccine. The practice in Victoria Road was one of two in the West Berkshire NHS clinical commissioning group’s catchment area to be selected.

Wargrave parish councillor Marion Pope, 82, and her husband Michael, 84, of East View Road, got their jab on Tuesday evening.

Mrs Pope said they “jumped at the chance” when they were invited as they have four doctors in the family and have been following news about the vaccine closely.

She said: “It was absolutely brilliant and run with military precision. The people of Wargrave should be very proud of their local surgery. They did very well with this year’s flu jabs, so they had a good formula to follow.

“We filled in some forms and the doctors asked if we had any questions or concerns but we’d already read about it online.”

The Popes will have their follow-up injection on January 5 and say they can’t wait for normal life to resume. Mrs Pope said: “We have two grandchildren living nearby and it is hard because we can’t cuddle them, although we’re planning to meet them for lunch on Christmas Day.

“We’re lucky to live in such a lovely area with lots of fields and the allotments. I just feel sorry for those living in towns and cities who are in close contact.

“I would encourage other people to take up the vaccine, although they should still think of others and wear a face mask.

“We went to Henley last week and only a quarter of the people we saw were wearing one.”

Meanwhile, the rate of coronavirus infections in South Oxfordshire continues to rise.

Laboratory tests confirmed 150 new cases in the past week compared with 101 in the week before. This brings the total number of infections to 2,058 since the start of the pandemic with a total rate of 1,449 cases per 100,000 of the population.

In the past week there were 170 new cases in Henley and surrounding villages, an increase from last week's figure of 71. This includes a leap in Sonning and Woodley North from eight cases to 34.